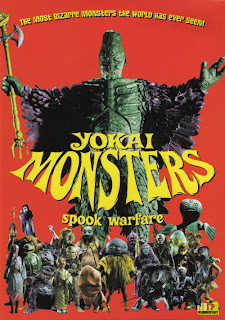 In reviews for the two other Yokai Monsters films made during the late 60s, I mentioned that one of my minor complaints was that there just wasn't enough screen time for the many creative ghostly apparitions that appear on screen. Whatever faults this knowingly goofy and fun-spirited middle movie of the series may have, that's not an issue this time out. As a matter of fact, there's little story or human characters to really get in the way. For many films that would be a problem, but that's not the case here.
There is a basic framework for the events of the film though - a long dormant spirit from Babylonia is awakened and makes its way to the shores of Japan. After killing a local magistrate and sucking his blood, it takes his form and sets itself up in his house. Requiring new blood on a regular basis, it also kills one of the magistrate's servants, takes over his body too (it can spread itself around through numerous bodies) and uses him to bring forth new suppliers of blood. What he doesn't count on, though, is the pesky Water Imp who lives in the pond and believes that he is the master of the premises. The Imp is easily tossed out of his abode by the powerful new ghost, but he gathers some of his spirit friends and convinces them that they must battle against this intruder from a far off land. 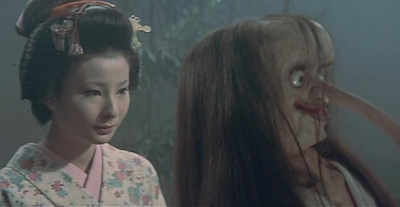 It's pretty silly stuff, but it's also great fun. The spirits actually suffer a bit from overexposure in the film, but when you have a long-tongued umbrella spirit, a snake-necked woman and a creature that can display remote viewings of events on his bloated belly, well, you want to get them as much screen time as possible. The special effects for these part human, part beast and part spirit apparitions are all handled via lighting, camera angles, edits, models, costumes, superimpositions, etc. and this is one of the movie's main charms. Sometimes the simplest effects are the best. The battle scenes between the many Yokai and the newly arrived spirit aren't exactly spectacular, but they still entertain and fit the tone of the film. Considering its kid-friendly nature, slapstick humour is also quite prevalent and the Water Imp is the main focus of many of those scenes. He also gets off one of the movies best lines - after being caught inside an urn with several of his fellow apparitions he quips "You Suck, Buddha! It was just getting good and you trapped us here!"
The Imp initially has a difficult time convincing his friends that the body of the magistrate has actually been taken over by this new ghost. After all, he isn't in the big book of Japanese ghosts, so how could he be relevant? However, once they discover he is indeed a brand new spirit from foreign lands, they do their best (and call upon as many other Japanese ghosts as they can find) to drive him out. After all, they have a reputation to uphold. That's about as close to political subtext as the film gets, but it's still a sneaky way for director Yoshiyuki Kuroda to slide in some commentary about Japanese protectionism. Kuroda flies solo on this outing before joining Kimiyoshi Yasuda for the final Yokai Monsters film "Along With Ghosts" (Yasuda helmed the first film "100 Monsters"). Though there are a few creepy moments in all three of these films, it would be a stretch to call them horror. Even with some bright red simulated blood, these films are appropriate for all ages and - outside of Miyazaki - provide some of the best representations of Yokai from Japanese folklore that I've seen. All three movies are available in one low priced set from ADV Films.

Read more from Bob Turnbull at his blog.
Posted by Chris MaGee at 5:24 PM

I really have to get around to watching these films. Have had the DVD set on my shelf for a while now, but haven't had time for a yokai fest... yet.