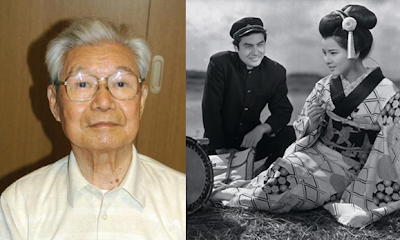 It was only at the end of last month that Japanese cinema lost Takeo Kimura, the production designer and art director who shaped Japanese film with his work on such films as Seijun Suzuki's "Tokyo Drifter" and "Pistol Opera". Now Japanese cinema has lost another artist who helped shape the medium, director Katsumi Nishikawa. Best know in the West for his 1963 screen adaptation of Yasunari Kawabata's story "Izu Dancer", Nishikawa passed away on Tuesday in Tokyo after suffering from pneumonia. He was 91.

Nishikawa was born in Tottori Prefecture and studied art at Nihon University. In 1939 he began his career in film by joining Shochiku as an assistant director. He would work under such senior filmmakers as Minoru Shibuya and Noboru Nakamura before finally getting the chance to direct in 1952. Only two years later he was to jump ship and take a job at rival studio Nikkatsu where he would gain a reputation as a director of seishun eiga, or "youth films". Many of these films, including "Izu Dancer (above right), starred actress Sayuri Yoshinaga and actor Hideki Takahasi and Nishikawa was credited with helping establish them as major stars. In 1974 Nishikawa would remake "Izu Dancer" with actress Momoe Yamaguchi and actor Tomokazu Miura.

Our condolences go out to Nishikawa-san's family, friends and colleagues. Thanks to Aaron Gerow for the details of this remarkable man's life.
Posted by Chris MaGee at 3:07 AM