REVIEW: To Walk Beside You 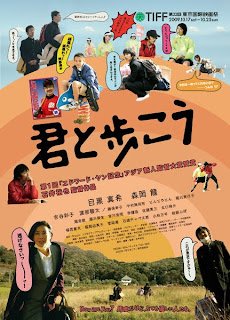 Ms. Tanaka (Maki Meguro) is a 34-year-old high school teacher whose broken the biggest taboo of an educator can break - she's fallen in love with a student. The object of Tanaka-sensei's affections is 17-year-old Norio (Ryu Morioka), a quiet, studious young man. This May-December romance is tinged with pain though. Norio has recently lost both his parents and Tanaka has a past that she would rather not discuss. Thankfully they can take solace in each other, but in order to safeguard their forbidden love the two must flee their small town and head to Tokyo where they can elope and get an apartment together. Life on the run isn't easy for these two lovers though. Tanaka has to get a job handing out flyers in front of a karaoke bar to not only pay the rent, but to ensure that Norio can complete his education and become a lawyer. Away from his peers Norio befriends a lonely, baseball obsessed 9-year-old boy named Yasutaro (Shunta Watanabe) never suspecting that he may hold the key to Tanaka-sensei's past life. With this kind of plot one would expect the kind of emotionally overwrought, soft focus romance that crowds the Japanese box office... and get both bucket loads of yen as well as tears from their audiences; but "To Walk Beside You" isn't your typical weepy romance. It's the fifth feature film by 26-year-old indie filmmaking wunderkind Yuya Ishii, a young man whose love for base humour and quirky comic timing makes it nearly impossible for him to make a standard two Kleenex box love story.

Ishii burst onto the Japanese film scene after graduating from Osaka's University of the Arts Film Department in 2005. The school already boasts prestigious alumni such as "Linda, Linda, Linda" director Nobuhiro Yamashita, "Kichiku: Banquet of the Beasts" director Kazuyoshi Kumakiri, and "GS Wonderland" director Ryuichi Honda, all filmmakers with their own distinctive and quirky slant on life. Ishii beats them all though. His debut feature, 2005's "Bare-Assed Japan" was the story of a recent high school grad and chronic masturbator who is avoiding adult responsibility as best he can. Since then Ishii has been a young man with a mission, churning out six feature films in five years (his latest, "Sawako Decides" will be screening this month in Frankfurt, Germany as part of this year's Nippon Connection line-up). Each of these has been peopled with losers, ne'er-do-wells, and social misfits who indulge in some very odd behaviour (the cross-dressing father in Ishii's 2007 comedy "Girl Sparks" is berated by his daughter for shitting in the tub) and fire dialogue back and forth like seasoned vaudeville performers. 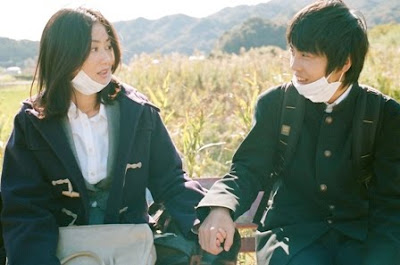 With this fifth film Ishii takes our expectations of what a romantic film with a title like "To Walk Beside You" are and intentionally subverting them. You won't find any tender embraces, saccharine J-Pop love songs, or tear-drenched goodbyes or reunions here. Instead Ishii serves up Norio's teenage friends fucking homemade sex dolls made from old nylons stuffed with cotton, an impromptu dance number in a factory, and a running gag involving young Yasutaro's worship of his favorite baseball player and Norio wearing a fake mustache. For many people out there "To Walk Beside You" may prove to be too much of a stretch and crave even a little bit of the romance genres mainstays. Even though I'm no fan of romance movies I do have to admit that even I spent half of "To Walk Beside You" waiting for at least one big passionate moment to arrive. The thing is it never does. Besides a moment when Tanaka and Norio throw their cell phones into a river to signify the start of their new life together and Norio confessing to his lover/ teacher that she looks beautiful when she eats Ishii never allows his characters to indulge in their emotions. Tanaka-sensei seems to be more concerned with Norio getting into law school than consummating her relationship with him and when she's at work Norio doesn't seem to spend a lot of time thinking about his older partner. I even half suspected that if Ishii wasn't going to provide romance then at least he'd deliver sex, implied or not, but Norio gets more kinky action from a woman who gets a thrill from getting him to pick up her dog's poo (and eventually her own).

Having said all that I have to say that I liked "To Walk Beside You" quite a lot. Yes, I had to get past my expectations, as many audiences will, but once that happened I realized that Ishii, a filmmaker who has relished his skewed and often childish sense of humour throughout his very short career, finally shows signs of maturing with "To Walk Beside You". Tanaka-sensei's frequent trips to the gym and beauty salon addresses the obsession that Japanese women of a certain age have with youth and beauty. Norio's passivity and disconnection speaks volumes about a whole generation of young men and women more used to communicating through cell phones and computers than they are face to face. Even little Yasutaro's delusional hero worship of Norio gives us a glimpse at a desperate need for role models in a society that has none. Most films would beat you over the head with these points, but "To walk Beside You" sneaks them past you while you're busy looking for the romance or doubled over laughing. Congratulations has to go out to Yuya Ishii, for achieving this perfect balance... and finally growing up!
Posted by Chris MaGee at 3:08 AM