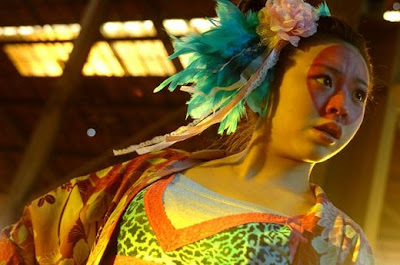 We've been following the progress of Noburo Iguchi, Yoshihiro Nishimura, and Tak Sakaguchi's "Mutant Girls Squad" since it was announced at the beginning of the year (read our coverage thus far here). This latest gore extravaganza from the Holy Trinity of the genre will tell the story of a 16-year-old girl named Rin (Yumi Sugimoto) who fights hordes of mutants with her own mutated arm in order to avenge the murder of her family (shades of "Machine Girl" methinks...).

We've already seen the teaser trailer for "Mutant Girls Squad", but now 24 Frames Per Second has alerted us to a slew of stills, character designs and new poster images for the film (due out in limited release in Japan in May) at its official blog. If you're a fan of Iguchi's "Robo Geisha", Nishimura's "Tokyo Gore Police", or Sakaguchi's "Samurai Zombie" then you won't want to miss this.
Posted by Chris MaGee at 1:11 PM