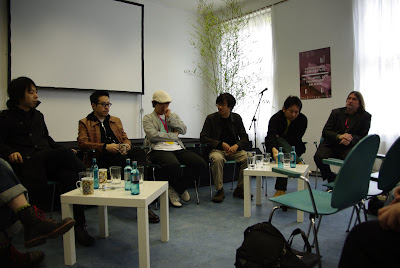 I bet a lot of you were thinking, "Hey, the Pow-Wow posted a Day 1 report for Nippon Connection, but where in the hell is Day 2?" Here is the dilemma of blogging a film festival - First you need to give priority to actually seeing the films (and between Marc and I that totals a dozen at the halfway mark), then getting the blog updated, first with reviews, the daily updates. Here's where the trouble comes in though - unless you get your head out of your laptop you won't get to hang out with "Our Brief Eternity director Takuya Kukushima (who's a super guy), you won't get to drink with indie actress Hiromi Miyagawa, a.k.a. Dump Neechan, the star of Sho Fujiwara's so-bad-its-good "Dump Truck Woman vs. King of Hormones", won't make new friends like "Directory of World Cinema: Japan" editor John Berra, won't share some weary words about jet-lag with Tomorowo Taguchi, and you won't have "Blood of Rebirth" director Toshiaki Toyoda encouraging you to sing Bon Jovi at karaoke (even for Toyoda I will not sing Bon Jovi). See what we mean? So Our apologies for making all of you wait, but here (in capsule form) is or summary of days two and three of Nippon Connection 2010...

First off, Nippon Connection 2010 was the festival that nearly didn't happen. If Mt. Eyjafjalla in Iceland had decided to blow its top a few days earlier, not only would the directors and guests not have been able to make it to Frankfurt, but nether would have the film prints themselves. Thank Mother Nature for taking her time, but now there are about 40 guests and numerous visiting press (including yours truly) who may or may not be flying back home on Sunday and Monday. Then again there are worse places to be stranded than Frankfurt. 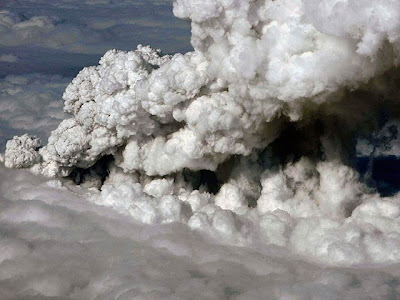 In terms of events for the first two days of the fest the big one was the opening press conference on Thursday morning with "Heaven's Door" director Michael Arias, Toshiaki Toyoda, actor and "Oh, My Buddha!" director Tomorowo Taguchi, "Live Tape" director Tetsuaki Matsue, and "8000 Miles (Saitama no Rapper)" director Yu Irie (above). The main topic of discussion was how to actually get films made and seen in Japan, a country that has suffered such punishing economic conditions in the past couple years. I had a chance to ask all the directors what they thought about Japanese movie studios producing more and more spin-off films of popular TV shows like "Rookies" and "Bayside Shakedown" rather than original films. Toshiaki Toyoda summed up everyone's feeling precisely with a two word answer, "It sucks." Michael Arias elaborated by saying, "I think that a lot of people now see going to the movies as an extension of watching TV except with popcor." With independent directors, as well as big name actors and directors like Arias and Taguchi, haaving a difficult time getting their films into the studio run multiplexes across Japan they are left with showcasing their work only in major city centers like Tokyo and Osaka that have independent film venues. Outside of the big cities though filmmakers simply have no place to show their films. That why venues like Nippon Connection are so important. As Tomorowo Taguchi observed "[At Nippon Connection] films that don't normally come together are screened in one place which is great!" Toyoda had a question for Nippon Connection co-founder Holger Ziegler, "Why a Japanese film festival?" to which Ziegler replied "Why not?" Best answer ever!

In terms of what films have been the hot tickets thus far - Taguchi's Oh, My Buddha!", "Kakera: A Piece of Your Life", the aforementioned "Dump Truck Woman" and Toyoda's "Blood of Rebirth" have been garnering serious buzz. In the case of "Dump Truck Woman" the buzz was about how bad the film was... then again many people were saying it's better to have a film that is made intentionally to be bad rather than a film like "Kaiji" which was made to be a good film but turned out terrible. In terms of What films I think have been worthy of the buzz I'd say "Kakera" for sure, and another film that hasn'y gotten the buzz that it deserved was Tetsuaki Matsue's documentary "Annyong Yumika", the story of AV starlet Yumika Hayashi aand her Japanese-Korean co-produced softcore porn film "Junko: Story of a Japanese Housewife". Very compelling viewing.

Anyway, it's time to run to the very first screening of Saturday, the Pia Film Festival special featuring "Big Gun" and "Schneider". Oh, and another party tonight. Check back for more reviews and details soon! We will leave you with one of the hilarious "Usavich" shorts directed by Satoshi Tomioka that have been screening before the films in the Nippon Digital Program. Hope you enjoy them as much as I have.