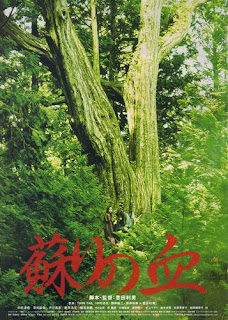 In 2005 director Toshiaki Toyoda was poised to take his career to the next level. At that point only 35-years-old Toyoda had already gained a reputation as one of Japan's most promising filmmakers. Throughout films like "Pornostar (a.k.a. "Tokyo Rampage")", the Taiyo Matsumoto manga adaptation "Blue Spring", and the masterful ensemble prison break film "9 Souls" he showed that he could combine tongue-in-cheek comedy with brutal drama, but by mid-decade he was ready to release a film that would place him alongside the likes of international festival favorites Kiyoshi Kurosawa and Hirokazu Kore-eda. "Hanging Garden" was an unblinking look at the disintegration of the Japanese family starring Kyoko Kozumi and Itsuji Itao as parents who demand 100% honesty from each other and their children, but who end up holding damaging secrets from each other. Not since Yoshimitsu Morita's "The Family Game" had a filmmaker presented such a damning llok at the core of Japanse society. Just as "Hanging Garden" was about to hit theatres Toshiaki Toyoda was arrested by Japanese authorities for possession of stimulants, something that if it had occurred in Hollywood would have been instant fodder for tabloids and then quickly forgotten, but in Japan this was a very serious offense. Toyoda would eventually be convicted and would be granted a three-year suspended sentence, but the damage to his career seemed irreversible. The release and distribution for "Hanging Garden" was quickly derailed, leaving directors like the aformentioned Kurosawa, Kore-eda, and director Ryosuke Hashiguchi to lead the resurgence in Japanese domestic dramas just a few short years later. For his part Toyoda stayed almost entirely silent, and there was a question if he would ever return to filmmaking again. He wasn't entirerly inactive though. Always a fan of music, and a master at incorporating it into his films, Toyoda would produce the debut album of the indie rock band Twin Tail. He would also contribute the video component to their live shows. After many had thought that Toyoda may have permanently made the career shift to music word finally came out last year that he was going to be returning to feature filmmaking. That project was the historical drama "Blood of Rebirth", a project that many will find difficult both because it is so different from Toyoda's previous output, and also because it is so maddeningly similar in term of technique.

"Blood of Rebirth" is based on the story of 15th-century adventurer Oguri Hangan Daisukeshige. The son of Kyoto aristocracy he traveled throughout Japan and one day arrived at the court of the evil lord Daizen in Hitachi. Oguri fell in love with Daizen's daughter Terute and while attempting to take her as his wife Lord Daizen kills him with poisoned sake. Oguri is left near dead. He is loaded onto a wooden sled that and dragged by commoners to a sacred waterfall that will bring him back to life and ultimately reunite him with his love, Terute. This story, which inspired kabuki and bunraku plays by Chikamatsu Monzaemon and Mimasuya Hyôgo, couldn't be father from Toyoda's previous films which highlighted disaffected modern day youth, social misfits and yakuza. Toyoda does put his own spin on the legend of Oguri though. In "Blood of Rebirth" the character of Oguri (played by Tatsuya Nakamura) isn't a nobleman, but a lowly traveling masseur, almost along the lines of Zatoichi. He comes to the court of Daizen (Kiyohiko Shibukawa), a despotic and paranoid lord who keeps teams of half-starved slaves and a harem of prostitutes. One of his prostitutes has infected Daizen with a sexually-transmitted disease that has swollen his testicles "like pumpkins" and sends him into fits of pain. He uses all his resources to acquire all kinds of potions, elixirs, tinctures, and tonics to cure him of his illness, and that's where Oguri comes in. It is while he is at Daizen's court, trying to massage the poison out of the Lord's muscles, that he meets Terute (Mayuu Kusakari), not Daizen's daughter as in the original story, but the only "clean" prostitute left in his harem. There is no whirlwind romance between the two, just Oguri telling the young woman that if she doesn't escape from Daizen's court soon she'll probably end up dead. Little does Oguri know that when he tries to leave the court that the Lord will kill him and send him into the after life. It's there that Oguri is given the choice of heaven or hell by a very laissez-faire King of the Underworld (played by Itsuji Itao). Oguri doesn't want either. Instead he asks to be returned to the land of the living, a place that the King of the Underworld says "is like hell, worse than hell." Despite the warning Oguri comes back from the dead as a hungry ghost, alive, but not alive and is dragged on his wooden sled by the escaped Terute to a magical spring that will return him to life. 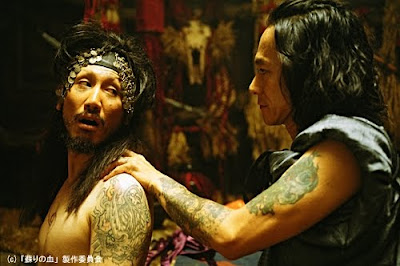 Given Toyoda's brush with drugs and then near total creative exile it is difficult not to draw comparisons between his life and that of Oguri's quest to return from the dead. Given what was most likely a terribly traumatic period Toyoda can be forgiven (even applauded) for this thinly veiled allegory of his real-life legal troubles. That being said, the brief description of the plot that I've outlined above pretty much sums up anyt narrative in "Blood of Rebirth". Once Oguri returns from the after life and is dragged cross country by Terute the narrative engine of the film stops and Toyoda uses his stylistic trademarks (use of propulsive and moody music and slow motion shots) to carry the rest of the film. It's a move that, I have to be honest, had me disliking "Blood of Rebirth" quite a bit at first. Beyond his distinctive visual style Toyoda, to me, is a filmmaker who creates instantly recognizable and sympathetic characters. I still marvel at his achievements in this regard when I watch his 2003 film "9 Souls", which I watch often. With "Blood of Rebirth" though character and narrative take a back seat to music, mood, landscape and colour. It was only after I stopped trying to make "Blood of Rebirth" be what I wanted it to be, namely a continuation of films like "9 Souls" and "Hanging Garden", that I began to ease into the film and start to fall under its spell. The only other film that I can think to compare "Blood of Rebirth" to is Takeshi Kitano's "Dolls", a film that was maligned much for the same reasons that I believe "Blood of Rebirth" will - thin plotting and sparsely drawn characters combined with lush visuals. Audiences, like me at first, will have a hard time sitting through the slow motion tracking shots and musical sequences in "Blood of Rebirth". The climax of the film that has Oguri renewing himself in the blood red spring of rebirth lasts 11-minutes, five of which consists of actor Tatsuya Nakamura yelling triumphantly.

The key to appreciating "Blood of Rebirth" is seeing it as an extension of the work that Toyoda was doing when he was unable to direct feature films. The soundtrack for the film is provided by Toyoda's friends in Twin Tail, and the jazzy, indie rock feel they give to this medieval drama is entirely unique. To accompany the music Toyoda has created a work that is designed to make us reflect, much as the character of Oguri reflects on his past life and return to the land of the living. Toyoda as a filmmaker has returned to his creative self, and in the process his vision has become focused and almost minimalist. It's a creative strategy that, if given enough patience by the viewer works very well. My only fear is that Toyoda will try and carry this same working method into future projects. Toshiaki Toyoda is back amongst the living and he has beautiful visions to share with us, but he must marshal all his filmmaking gifts, including that of creating unforgettable characters and storylines, in order to put these past few turbulent years behind him and continue to be one of Japan's most important filmmakers.
Posted by Chris MaGee at 3:43 AM