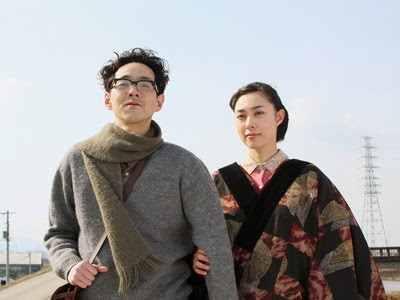 It was last spring when news came out that a biopioc about the lives of "Gegege no Kitaro" creator Shigeru Mizuki and his wife of 48-years Nunoe Mura was going to be coming to the screen. What many of us thought was going to be one project ended up being two - the first a TV drama series that aired last year on NHK and that starred Osamu Mukai as legendary manga artist Mizuki and Nao Matsushita as his wife. That TV drama ended up doing very poorly in the ratings, but that hasn't deterred producers (one of which is longtime Pow-Wow friend Atsuko Ohno) from bringing the feature film adaptation of Nunoe Mura's autobiography "GeGeGe no Nyōbō (Spooky Wife)" to the big screen.

Nippon Cinema is reporting that director Takuji Suzuki's take on "GeGeGe no Nyōbō" is getting ready for its international premiere at the 32nd annual Pia Film Festival next month. This time around Mura will be portrayed by 27-year-old actress Kazue Fukiishi (above right) and that Shigeru Mizuki will be portrayed by... can you guess by looking at that man on the left? You might not recognize him without his usual floppy beah hat, but that is "Ping Pong" and "Zebraman" screenwriter Kankuro Kudo.

After it's premiere at PFF next month Japanese audiences can expect to see Suzuki's "GeGeGe no Nyōbō" in theatres in November. Check back this Friday for more news on this year's Pia Film Festival, but for now here's an interview with the actual Shigeru Mizuki and Nunoe Mura from Japanese TV.

There are many factors work behinde to make a popular
film. It have been seen that high budget film always is not get sucess. Theme and
acting is a proportional factors for a original film.