REVIEW: The Castle of Cagliostro 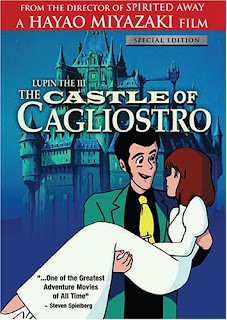 When I first sought out “The Castle of Cagliostro,” I was hardly aware that the anime is but one part of a considerable multi-media franchise centered on the dashing thief Arsène Lupin III, who first appeared in a manga in 1967 by Kazuhiko Kato (AKA Monkey Punch) and is the grandson of the Sherlock Holmes-ian Arsène Lupin of Maurice Leblanc’s novels. Featured in multiple manga, television series, films, video games and even an on-stage musical, he is surely one of the most well-known characters in Japanese pop culture. “The Castle of Cagliostro ” is in fact the third Lupin III film, after the live-action “Strange Psychokinetic Strategy” (1974) and the anime “The Secret of Mamo” (1978).

“The Castle of Cagliostro ” begins in a burst of action with Lupin robbing a casino in Europe with his regular right-hand man Jigen and fleeing with the loot in his car while his pursuers are left behind in their sabotaged vehicles. They eventually find themselves in the Duchy of Cagliostro, which Lupin respectfully refers to as “the black hole of the counterfeiting world.” However, it isn’t long before he and Jigen are swept up in another adventure, this time by an exciting car chase in which a girl in a wedding dress and flowing veil is being pursued by a bunch of sinister, trenchcoat-clad thugs. She is safely rescued, only to be recaptured and taken away to the castle of Count Cagliostro , which supposedly holds the secret of the famous “Goat” counterfeit bills. Years earlier, Lupin tried to break into it, only to make a hasty retreat. The girl is revealed to be Lady Clarisse, the daughter of a Grand Duke, who is being forced to marry the villainous, mustachioed Count so that he can discover the location of a hidden treasure. Lupin and Jigen soon begin forming a rescue plan and are eventually joined by familiar characters of the Lupin III series: the solemn samurai Goemon; femme fatale Fujiko and Inspector Zenigata, an INTERPOL agent who constantly attempts to capture Lupin and his gang. 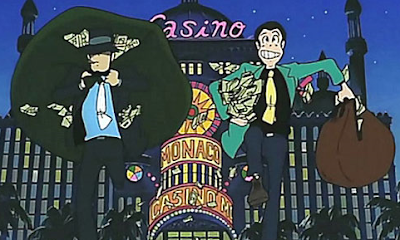 “The Castle of Cagliostro ” marks the feature film debut of Hayao Miyazaki, who had previously directed episodes of the Lupin III anime series “Rupan sansei” from the early 1970s. He was then not yet part of Studio Ghibli, in which he would later make such career landmarks as “Castle in the Sky” and “My Neighbor Totoro.” However, there are easily apparent signs of promise in “Cagliostro,” and the world of Lupin III provides a welcome playground for Miyazaki to flex his imaginative muscles in. The film contains plenty of fun and exciting set pieces, including the aforementioned car chase sequence, which is packed with grenades, gun fights and reckless driving; Lupin and Jigen’s elaborate plan to break into the castle; clashes between the Count’s guards and Zenigata’s Japanese policemen and the climax in a clock tower full of dangerous spinning gears. Yet in-between all the wacky mayhem, Miyazaki makes sure to include some quiet, lyrical moments, such as when several counterfeit bills are shown fluttering through the air before the opening credits and the touching scene in which Lupin visits and befriends Lady Clarisse as she is being held prisoner.

Though the animation style of “The Castle of Cagliostro” is a little rougher than what one would expect from a more recent Miyazaki film, it is still well done and visually appealing. Similarly, while the infiltration-and-rescue storyline doesn’t allow as much freedom or creativity as Miyazaki ’s more fantastical works, it is still a highly enjoyable and engaging excursion from reality. Being my first Lupin III adventure, the film served as a warm welcome to the character’s world, and I will be quite eager to discover what else it and its iconic, sharply-dressed thief have to offer.

Read more by Marc Saint-Cyr at his blog.
Posted by Chris MaGee at 10:19 PM