REVIEW: Pleasures of the Flesh 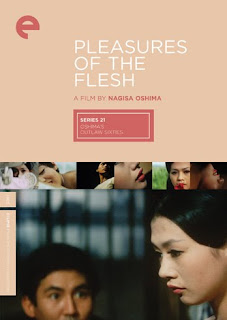 There had never been a year in which film had received so many attacks from the outside. That is why Japanese film needed me. 'Pleasures of the Flesh' was my response to that. — Nagisa Oshima, on the "Black Snow" controversy over obscenity in film

Nagisa Oshima's "Pleasures of the Flesh" begins with a fantasy sequence at a wedding establishing the protagonist's one-sided obsession with a girl. Pretty, demure, perfect in her white gown, she flees the altar and her groom-to-be and runs toward him. Tellingly, she runs right past him: so deep is his self-loathing that even in an imaginary world, he can't have the idealized object of his affection. But like a helpless, low-rent Humbert Humbert without the intellect or even false hope of one day having his Lolita, he continues to obsess.

Manipulated into murder then blackmailed into being accessory to large-scale embezzlement, tutor Atsushi Wakizaka (an effectively all-over-the-map Katsuo Nakamura) never fully realizes that his earnestness and devotion to his former pupil Shoko (Mariko Kaga, impossibly cute) is a dead end. When blackmailed into safeguarding ¥30 million skimmed from public funds by a prison-bound civil servant, Wakizaka quietly follows instructions and ignores the cache of cash to keep Shoko in the dark about her role in an earlier crime. But when his unrequited love for her is brought to the fore by her marriage to someone else, he decides that he would rather live like a king for a year then kill himself, reasoning that without Shoko life isn't worth living. It's a plan borne of desperation and youthful idealism, and like most such plans it goes south, bit by bit. 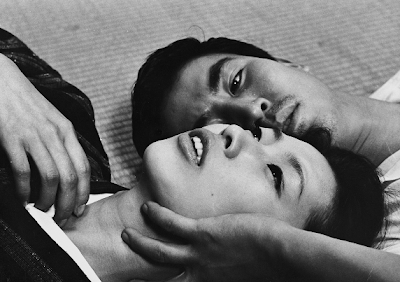 Wakizaka's obsession with Shoko—a girl too young, too pretty, and too wealthy for him—manifests in several ways: hallucinations of her observing his new life, and how he decides to spend the money. He seeks out women who bear some resemblance to Shoko, and pays them unheard-of sums to be substitute objects of sexual attention. These relationships tell the story across the span of 4 women in 12 months. Hitomi is a mob moll happy to blow all his cash on perfume and clothes. The first of his paid conquests, she brings out his chivalrous side as he misguidedly tries to protect her from the Yakuza who wants her back; she's used to being kept, and responds to his affection with a blithe indifference. His second, the unhappily married and beleaguered Shizuko, brings out the sadist in him; he recognizes that the only way to please her is to mistreat her and does so in various ways, at one point casually burning her foot with a cigarette. The third, Keiko the nurse, is his biggest challenge: fiercely independent, seemingly bipolar, and inexperienced with men, she puts up enough of a fight to keep Wakizaka interested past an entire month of no sexual contact. She's also the only one of his women who ends things with him before he can move on, which sends him careening into the arms of Mari. A deaf mute simpleton nymphomaniac, she's the ultimate Shoko stand-in: eager to please, sexually insatiable, and incapable of disagreeing with him or offering any resistance whatsoever.

Wakizaka's 12-month crash course in sex ed is removed from reality in it's construction, but is squarely in the gutter in it's execution. Rather than live the life of a millionaire playboy, Wakizaka's lack of vision has him getting beaten by thugs and falling into drainage canals. So scant is his sense of self-worth that he can't give himself the creature comforts befitting a guy with his budget. At the start of his yearlong journey he rents a high-rise apartment and wears suits; by the end he's in a flophouse room that is somehow more dank and depressing than the windowless dorm he called home pre-spree, his disheveled clothes hanging off his frame.

Oshima never allows the viewer to get too comfortable in the film's narrative. Nakamura's Wakizaka is always sweating, worrying, internally counting down the time he has left; his relationships are strained and artificial and the camera either keeps him removed from his surroundings or shifting and observing the action as if he was the one watching a film. Compounding his discomfort, Shoko appears from time to time as an imaginary observer, a visual manifestation of Wakizaka's conscience. As in the opening fantasy wedding, Oshima elegantly characterizes these sequences as dreamlike by utilizing sudden silence and slow motion. As his guilt and confusion lesson, so do Shoko's appearances. By the time he's paying to sleep with Mari he's effectively beyond self-reproach, or at least desensitized to such a degree that he no longer fears Shoko's gaze.

Wakizaka's trajectory follows roughly the course you'd expect, and the film's ending feels slightly too tidy. The twists that cap off the film might have worked in a literary context but feel somewhat perfunctory onscreen. But this protagonist is so begrudging of life, so defeatist in attitude, that every win is a loss. The end was bound to be something along these lines, but it's the only part of the film that feels inorganic, constructed. No matter. Credit Oshima with having a great eye for source material, in this case Futaro Yamada's novel "Pleasures of the Coffin". Japanese directors as diverse as Kurosawa and Yamada have also had this knack, resulting in accomplished work such as "Rashomon" and "Twilight Samurai" which, though adaptations of another's creative vision, feel uniquely cinematic. And while "Pleasures of the Flesh" doesn't quite occupy the same place in the canon, it's an effective and compelling study in obsession and self-destruction.
Posted by Chris MaGee at 6:08 PM