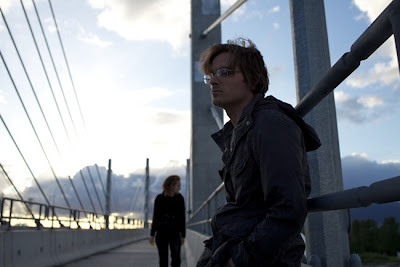 We've been watching the progress of Shunji Iwai's English-language vampire film, simply titled (at least at the moment) "Vampire", since it was announced back in March (read our full coverage so far here). Personally I've been excited about Iwai's return to feature filmmaking, so when I saw that Twitch correspondent Andrew David Long had managed to make a visit to the set of "Vampire" which is currently shooting in Vancouver I, and a bunch of other people online, sat up and took notice.

It's a great piece, so I won't even try and paraphrase it here. The best thing to do is go to Twitch to read it for yourself, but here are some teasing bits of info to get you to do that. The things that immediately struck me is that the vampire of the title, played by Kevin Eggers, might not be a vampire at all, at least in the classic supernatural sense of the word. In the script penned by Iwai Eggers character Simon, has a taste for blood and he gets it from lonely suicidal women he meets online. No mention of the undead, staying out of the sunlight (that's Eggers as Simon in the light of day above), no garlic, no crucifixes, nothing. Iwai's vampire seems to be a killer, plain and simple and according to Eggers portraying Simon is quite the challenge, "It feels very much like abuse," he explains to Long, "and I knew all along that this was going to be a very emotionally taxing thing, so I was prepared for the beat-down."

This skewed, and it appears very dark look at the vampire mythos is something that Iwai is keen to bring to the screen. He name drops some classic gothic and surreal authors when describing his aesthetic with "Vampire", "I'm more interested in creepy, brutal, immoral things that look beautiful... like Edgar Allan Poe, or Georges Bataille." Besides being responsible for the script Iwai is of course directing, and acting as cinematographer AND composing the film's score! It this kind of passion that makes me excited for this film.

Again, though, if you wanted o get as excited as I am then follow the link above to Andrew David Long's behind-the-scenes report. You can also check out a very creepy still featuring Canadian actress Amanda Plummer.
Posted by Chris MaGee at 5:29 PM