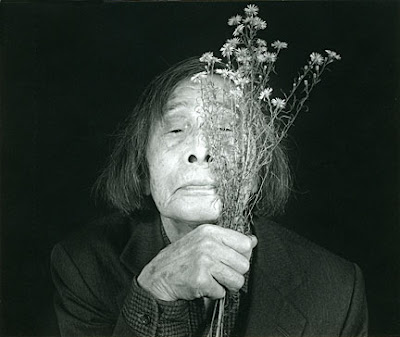 It's a sad day for the the world of Japanese culture. Kazuo Ohno, the dancer and choreographer who along with Tatsumi Hijikata founded the butoh form of modern dance has passed away today, June 1st, at his home in Yokohama. He was 103.

Ohno was born in Hakodate, Hokkaido in 1906. His father was the head of a fishing co-op. While his father was away at sea Ohno was deeply influenced by his mother, a woman of genteel European tastes in music and cooking. Ohno would grow up to be a physical education teacher at a Christian girl's school in Yokohama. It was here that he adopted the Christian faith that would inform his personal and artistic life. It would also lead him to his pacifist beliefs. In 1929 he witnessed a performance by Argentine flamenco dancer Antonia Mercé y Luque, better known by her stage name La Argentina, and it was this performance that inspired Ohno to study dance. Sadly his studies in dance and his pacifist beliefs would be compromised after Ohno was drafted into the Imperial Japanese Army in 1938. He would serve 9 years as a captain in charge of munitions and eventually be imprisoned in a POW camp in New Guinea. Upon his return to Japan in 1946 he continued his dance career, and in the mid-50s joined forces with dancer and choreographer Tatsumi Hijikata. Hijikata, who would later be featured in the films of Teruo Ishii such as 1969's "The Horrors of Malformed Men", was formulating a new dance form he called ankoku butoh, or "dance of utter darkness". Ohno would assist Hijikata in the creation of this revolutionary dance form that synthesized elements of traditional Kabuki theatre, Antonin Artuad's Theatre of Cruelty and imagery associated with death, transformation and rebirth. While Hijikata would pass away in 1986, Ohno would continue to dance, choreograph and teach, even dancing in a wheelchair as recently as the late 1990s.

Many will ask, "What does a modern dancer have to do with Japanese film?" Well, like Hijikata who appeared in the aforementioned Ishii ero-guro films, Ohno's gentle and often cross-dressing presence was featured in many films both by Japanese filmmakers (Takahiko Iimura, Chiaki Nagano) as well as filmmakers from around the globe such as Hal Hartley's "Flirt", Peter Sempel's "Just Visiting This Planet" and Daniel Schmid's "The Written Face". Ohno had also recently gained exposure through the music of UK group Antony and the Johnsons.

The world of dance, theatre, and film, whether at home in his native Japan or anywhere around the globe will be a much different place without Kazuo Ohno. Our deepest sympathies go out to Ohno's son, dancer Yoshito Ohno, and his family, friends, students and colleagues.
Posted by Chris MaGee at 5:27 PM