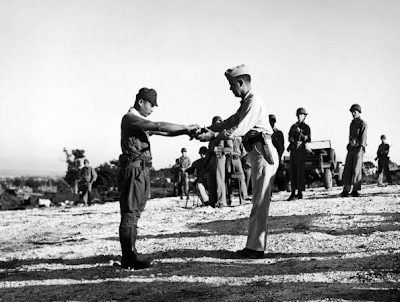 In December 1st, 1945 a small band of Imperial Japanese servicemen on the Pacific Island of Saipan surrendered to American forces led by Col. Howard Kurgis (That moment was captured in the famous Time Magazine image above.) For those of you doing the math that was months after the surrender by Emperor Hirohito on August 15th of that same year. This band of 46 Japanese soldiers were led by Captain Sakae Oba, nicknamed "The Fox" for the guerrilla war tactics that he and his men employed to maintain control of this small island in the Marianas chain of Islands. Oba simply wouldn't surrender.

Now this dramatic story is being brought to the screen by Hideyuki Hirayama (Out, Shaberedomo shaberedomo) in a film titled "Taiheiyou no Kiseki ~ Fox to Yobareta Otoko". The film will be based on Oba's autobiography "Oba: The Last Samurai" which was co-authored with American war vet Don Jones, one of the m any American soldiers who fought against Oba and his men on Saipan. In the film Oba will be portrayed by popular TV actor Yutaka Takenouchi.

The film is scheduled for release next tear, in February to be precise, but 2011 marks another very important date in WW2 history. Next year will mark the 70's anniversary of the bombing of Pearl Harbour, the punishing attack by the Japanese Air Force on the U.S. Navy. Could "Taiheiyou no Kiseki ~ Fox to Yobareta Otoko" end up being a jingoistic war movie along the lines of Taku Shinjo's "For Those We Love" and Shunya Ito's "Pride"? Guess we'll have to wait until next year to find out.

Thanks to Tokyograph for the details on this.
Posted by Chris MaGee at 5:24 PM