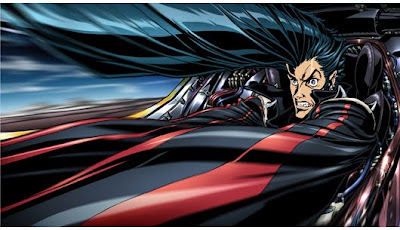 September is almost here, so North American genre film fans that can mean only one thing - Fantastic Fest! The fest, founded by Alamo Drafthouse owner and operator Tim League and Ain't It Cool News webmaster Harry Knowles, has been going strong since 2005 and for this, its 5th offering, Fantastic Fest will continue to bring the best in genre filmmaking to Texas. Of course that includes some amazing content for fans of Japanese film. This year festival attendees will get a chance to catch three very high profile new releases.

First up is the North American debut of the Takeshi Koike (Ninja Scroll) directed and Katsuhito Ishii (Funky First: First Contact) scripted high speed animated raciong film "Redline" (above) that includes such big name voice talent as Tadanobu Asano and Yu Aoi. Then there's Yoshihiro Nakamura's phenomenal ( and I do mean phenomenal) thriller "Golden Slumbers" starring Masato Saki as a man wrongfully accused of assassinating the Japanese Prime Minister. To round things off Fantastic Fest will be bringing "Outrage" (trailer below), Takeshi Kitano's return to the yakuza genre, to North America. Critical reception for this one has been split right down the middle, so it'll be interesting to see how a genre-loving audience will receive it.

The 5th annual Fatantic Fest will run in Austin from September 23rd to September 30th. To check out all they have lined up for audiences this year check out their official website here.