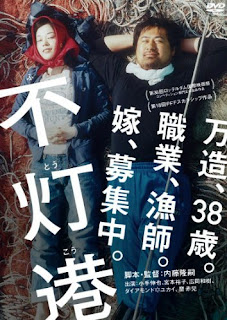 Early in Takatsugu Naito's "The Dark Harbour", we get a simple closeup of Manzo the fisherman's hands - they are rough, worn and have obviously done a great deal of labour in their days. His life, as shown in the virtually wordless opening segment of the film, is a simple one. Since he lives alone, runs his own fishing boat by himself and doesn't have the best social skills in the world, it's also a very solitary existence. It's not that he wants it that way, but that's just how things are. His attempts to meet a woman aren't very successful, but he's convinced that he would make a fine and tender husband if given the chance. It's tough, though, since the local women get snapped up and the city women can't see through his awkward exterior. So when an opportunity presents itself, Manzo dives right in.

If the film's title doesn't properly set your expectations for the sweet and gentle story about one man's wish to share his life, it does still show some of the darker elements of humanity. Jealousy, selfishness and cold detachment all rear their ugly heads at certain points, but Manzo's good heartedness is always at the centre (even if he may also engage in some of those behaviours). The catalyst for the events of the film stem from the announcement of a party arranged to introduce the town's working men (mostly fishermen) to a group of "city women" who are brought in by boat. As preparation, all the men must record a short video describing themselves. The evening of the mixer doesn't go well for Manzo, but when his film is projected on screen he is shocked to notice a woman and small boy watching him intently from inside his closet. The crowd thinks they are ghosts, but in fact they had just sneaked in to eat some of his food and rest while he was out and had to hide when he came home unexpectedly. They both seem to be genuinely moved by his thoughtful words about having the capacity to be a tender husband even though his outward physical appearance has been beaten down by years of hard work. After an initial "get out of my house" reaction, Manzo reconsiders, finds them and asks them to stay with him. 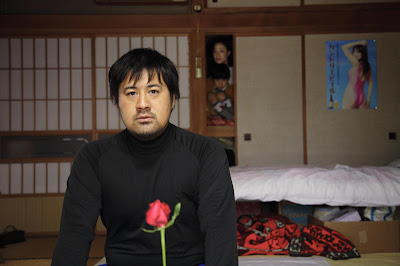 In the context of the film, the sudden nature of him asking these homeless people to move in with him makes perfect sense. He tells them that he never wants to eat alone ever again and that his life is suffocating him. What follows are lovely moments of pure cinema - he makes a scarf for her from some discarded material he had found earlier in the water, he creates a treasure hunt for the little boy Masao (who isn't actually Mitsuko's son - her previous boyfriend was the father but abandoned them both) and takes them on a slightly surreal picnic. Combined with some of the very mannered dialogue and wonderful bouncy musical score, the film paints an odd dreamlike feel to these moments - quite appropriate since Manzo obviously has a specific idea in mind as to what a family relationship should be like. Even though you can't help but smile through this section of the film, you know that there is something amiss. Does he really love Mitsuko or is he in love with the idea of loving someone? Does she in turn really care about him or is she just using him as a temporary port while she refuels?

The pace of the film is a marvel. Though it is wordless for its opening 9 minutes, without dialogue for a full 15 minutes and mostly depends on characters' actions, reactions and characteristics to drive the story, its 102 minute runtime absolutely flies by. It still finds time to linger on the activities of the people in the harbour or amble through their picnic, but it's never without reason and always seems to add more texture to the story. It contains some very funny moments as well, in particular Manzo's clothes shopping expedition before the party with the city women. As it turns out, purple suit jackets and fringed cowboy coats aren't as trendy as he was led to believe. Manzo (played in a perfectly suited understated manner by Shinya Kote) couldn't really be described as a great catch, but he engenders not only the audience's sympathy but their good will too. Until meeting this pair of drifters who happened to dock at his house, he says that he never had the motivation to change his life. But now, maybe his ship has finally come in.

Read more from Bob Turnbull at his blog.
Posted by Chris MaGee at 9:05 AM