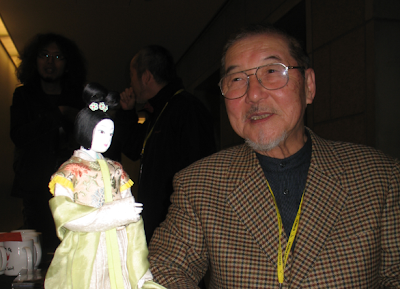 This past week has already seen the death of one of the most promising animators in Japan, Satoshi Kon, so it was with an equal amount of shock and sadness that we read of the passing of yet another famed Japanese animator this same week. Anime News Network reported that world-renowned puppet animator Kihachiro Kawamoto died after a bout of pneumonia on Monday, August 23rd. He was 85.

Born in 1925 in Tokyo Kihachiro Kawamoto originally wanted to pursue a career in architecture while taking up doll-making as a hobby. In 1950 he teamed up with publisher Tadasu Iizawa to create a series of doll storybooks. It was at about this same time Kawamoto discovered the works of the pioneering Czech stop-motion animator Jiri Trnka. Inspired by Trnka Kawamoto began studying under stop-motion animator Tadahito Mochinaga and by the 1970s he was making elaborate films based on traditional Japanese folk tales and Western fairy tales. Kawamoto worked his entire craeer as an independent artist while gaining great fame at home and abroad. Not only did he have 200 of his intricate handmade puppets housed in his own museum in Iida City, Nagano Prefecture, but he also spent several years sitting as the President of the Japan Animation Association, a post previously held by Japan’s "god of Manga and Anime" Osamu Tezuka.

On a personal note, I was very honoured to feature a programme of Kawamoto's animation at the most recent Shinsedai Cienma Festival here in Toronto. My partner on the festival, Japser Sharp, put together the programme of Kawamoto shorts specifically for the festival and the feedback from audiences was universally glowing. To see how quickly and how deeply people were affected by Kawamoto's films is a testament to his brilliance as an animator and a storyteller. Kihachiro Kawamoto will be sorely missed. Our deepest condolences go out to his family and colleagues.
Posted by Chris MaGee at 9:07 AM