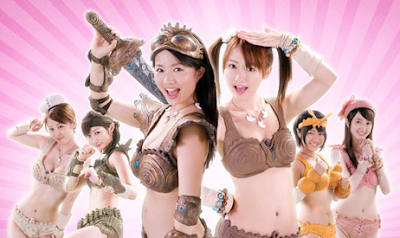 It was a year ago that news came out about a new TV series created by "Machine Girl" direcor Noboru Iguchi. Titled "The Ancient Dogoo Girl" the series, which premiered in October and ran for two months on Mainichi Broadcasting System, told the story of a 10,000-year-old girl, played by busty 18-year-old actress and member of pop group Idoling!!! Erika Yazawa, who is brought back to live to fight ancient bad guys who are unleashing their evil on present day Japan. It looks like folks couldn't get enough of Yazawa and her magical breasts/ ceramic brassiere (check out the trailer for the series below to see what I mean) because the series was followed up by a full-length feature and now Tokyograph is reporting that MBS and Iguhi are prepping a new series with not one, but five buxom Ancient Dogoo Girls!

Titled "Dogoon 5" the series will feature more more tongue-in-cheek supernatural adventures with a healthy dose of T&A courtesy of the returning Yazawa and her four new co-stars - Misaki Momose, Rina Takeda, Manami Nomoto, Maria Yoshikawa and Haruka Dan. Each Dogoo Girl will posess special powers such as super strength, nursing skills, power dreaming and master fighting skills. The girls will be going into action this October with Iguchi and creative partner Yoshihiro Nishimura in tow to provide some of the over-the-top special effects.

Thanks to Oricon for the above promotional still.

Best news ever. Dogu0chan's show was a scream, and while one of her was enough for me, my mind is wide open!