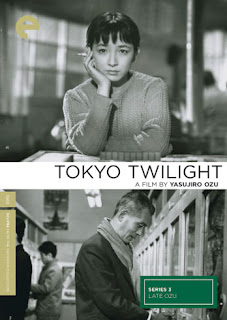 The significance of “Tokyo Twilight”’s ominous title is made quite apparent throughout the film’s running time. A late work from Yasujiro Ozu, it noticeably wanders into darker territory than usual for the director, even though, at that point in his career, he was certainly no stranger to tackling such issues as familial discord and generational conflict. For the only time in his post-war phase, he situated his story in the dead of winter, which emphasizes the grim emotional trials his characters go through to such an extent that one could perhaps draw a realistic comparison between him and Ingmar Bergman.

“Tokyo Twilight” features Ozu regulars Chishu Ryu and Setsuko Hara as, respectively, bank executive Shukichi and his daughter Takako. They and Akiko (Ineko Arima), Takako’s younger sister, have supported each other ever since the women’s childhood, when their mother (Isuzu Yamada) abandoned the family. Takako, who is herself mother to an infant son, is currently trapped in a wobbly marriage with Numata (Kinzo Shin), a translator struggling to find work. The more impulsive Akiko has problems of her own that are hinted at through her suspicious behavior: during evenings, she asks friends to loan her 5000 yen and searches for a man named Kenji (Masami Taura). It is eventually revealed that she is pregnant with a child by him and seeking the necessary funds for an abortion while trying to keep it all a secret from her father and sister. Further complicating the family’s stressful situation is the reemergence of the mother, who now works as a mahjong parlor proprietress. 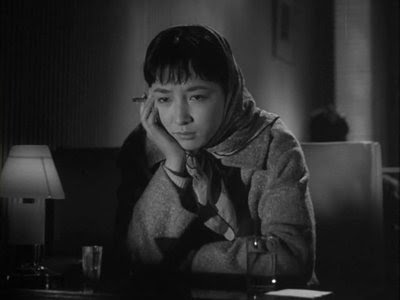 In Ozu’s capable hands, “Tokyo Twilight” achingly portrays the transaction of negative feelings between parents and children. When the mother first reveals herself to Takako after her lengthy absence, there is no teary reunion or sappy outpouring of cheer and forgiveness. Instead, Takako rightfully expresses her resentment towards the woman before her and warns her not to seek out Akiko for fear of upsetting her. Yet not all is well on the father’s side either: after a minor incident in which Akiko is taken to a police station (but not charged) for staying out late, Shukichi reacts strongly, believing that he has failed as a parent in some way and regarding her as a disappointment. The film is very much concerned with expectation and the failure to live up to it, exploring the responsibilities that rest upon both parents and their offspring.

Partly because of the film’s winter timeframe, there is a particularly strong sense of setting and mood. Using his trademark pillow shots and trained eye for urban spaces, Ozu immerses his characters and the audience with them into the city of Tokyo . However, this time it is a dark and even, at times, unfriendly place. Much of the film takes place at night and moves between bars, noodle restaurants and the mahjong parlor, focusing on the quiet pockets of activity that take place in the nocturnal hours. Outside of these busy spaces, desolate streets and naked tree branches suggest a harsh world in which comfort and security are highly valued commodities. Fittingly, many memorable images consist of characters doing whatever they can to shelter themselves in one way or another, among them the groups of seemingly content mahjong players engaged in their games and a desk attendant huddled over a steaming teapot. But, alarmingly, such warmth is less consistently offered by the family unit, as it is constantly fragmented and a frequent source of conflict. This depressing subject matter makes for an exquisitely rendered drama populated with complex, relatable characters. As they experience tragedy and reevaluate their lives, they shed new insight into the bonds of blood and love and the obligations that come with them.

Read more by Marc Saint-Cyr at his blog
Posted by Chris MaGee at 5:19 AM