Could it be true? Were we wrong and Kitano will in fact be making a sequel to "Outrage"? 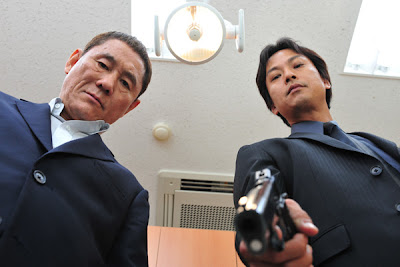 Well, look who has egg on their faces? We do, because unless this report posted over at Japan Today is coming totally out of left field then it looks like Takeshi Kitano himself has confirmed that he will indeed be making a sequel to his last film, the yakuza drama "Outrage". As regular readers of the Pow-Wow blog will know, this past Tuesday I went on at length about how I was convinced the rumours flying around about a sequel to Kitano's return to the yakuza genre were false. Seeing that the same kind of rumours followed Kitano's "Zatoichi", another film that did very well at the Japanese box office, my strong suspicions seemed founded, but it turns out that we might have been wrong.

The Japan Today article indicates that "Kitano’s management announced that he plans to outdo himself with this, his first sequel, which is to be a more polished movie than the original." Of course the original co-starred Ryo Kase, Kippei Shiina, Tomokazu Miura, Soichiro Kitamura and Jun Kunimura as gangsters caught up in a war between rival yakuza clans. Japanese domestic audiences ended up shelling out over ¥750 million, which is only just over $9 million CAD, but for a Kitano film, which normally bomb at the Japanese box office, "Outrage" did some booming buisiness.

Now, we will still hedge our bets and continue to say might for the next little while as we all know the vagaries of the film industry. For now though it looks like the J-Film Pow-Wow will have to eat a bit (but just a bit mind you) of crow.
Posted by Chris MaGee at 5:43 AM

I wrote about this for Screen on the 7th (http://www.screendaily.com/news/asia-pacific/takeshi-kitano-announces-plans-for-outrage-sequel/5017854.article go through Google news for free).

Office Kitano prez Mori Masayuki spoke at the press conference about the sequel and Kitano commented in a written statement on besting the first film, which he wasn't overly satisfied with.
Office Kitano told me they want to outdo the scope and box office, which was decent -- it's definitely happening.

The first article might have been pulled because it was posted earlier than it should've been.