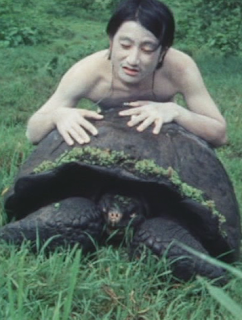 This stanza of poetry is the work of Goku Katsumaru, the protagonist of Kanai Katsu's 1973 film "The Kingdom". Goku is a young man out of step with his surroundings and most importantly out of step with time. Before we ever meet this young poet experimental director Kanai Katsu throws us into the rushing river of time. The first thing Kanai shows us on the screen is a ringing alarm clock and we're then hurried along through image after image of people jumping out of bed with just enough time to shove some some breakfast into their mouths and run to the station to make sure they're on time for their train. This image of Japan circa 1973 is just as valid today 37 years later. As a Japanese friend once told me, "I don't think people in the West really appreciate time." In the midst of this rush of bodies Kanai shows us Goku's literary agent, a long-haired, bearded man who casually walks against the tide of the crowd. He smokes his pipe and soon he is in a quiet world of back street and empty markets, an urban world abandoned by respectable Japanese whose are all sequestered away in offices, schools and factories, their blood pressure soaring as they keep one eye on the clock. He is our gateway into Goku's world and Kanai's vision of a secret society obsessed with conquering time.

"The Kingdom" is the third film in Kanai Katsu's avant-garde Smiling Milky Way Trilogy which began with two politically loaded films, 1968's "The Deserted Archipelago", a dream journey through the the post-ANPO Treaty 60's, and 1971's "Good-Bye", an exploratrion of the plight of the zainichi, or Japanese of Korean heritage. "The Kingdom" doesn't take on any loaded current event or momentary societal ill though. Instead it goes to the root of Japanese (and global) society's engine - time - and in that way "The Kingdom" is probably the most radical film in Kanai's trilogy of films. It's apparant to us right from the very beginning that Goku is a young man struggling, seemingly pained, by this measured tick tock world. His poetry isn't so much a creative expression as a form of protest. The seemingly directionless time it takes to write it goes against hurried and purposeful lives of the japanese around him. Goku also aggressively holds on to tired old fads like hoola hooping, pasttimes that had long ago been abandoned in this busy world. 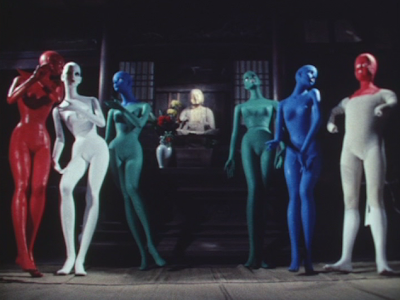 Soon Kanai's camera begins to follow Goku as he spends his afternoons wandering the streets or riding the trains. It is here that Goku (and we in the audience) encounter like-minded souls who share in Goku's desire to break with time. There is the group of pickpockets led by Pick-Eye Heiji who never steal for profit, in fact they mostly steal the eyes from the diginitaries pictured on Japanese currency. There's the professor of ornithology who is obsessed by how birds possess the inate ability to keep track of the seasons without the use of a clock. Can this be the key to discovering something in ourselves that could sever us from time entirely? It's this professor who gives Goku his virtual mantra that is repeated through "The Kingdom": Those who master the micro shall master the macro. Goku is even made privy to the Kronos Convention, a society whose mebers include Kanai Katsu himself in a cam eo that has the filmmaker bravely or crazily setting himself on fire.

Kanai Katsu, whose surreal visions are easily on par with such avant-garde notaries as Alejandro Jodorowsky, Seijun Suzuki or the early films of Luis Bunuel, goes to even greater lengths that setting himself on fire to bring his battle against time to the screen. Kanai, who has spent the vast majority of his career working independently and away from the mainstream, somehow managed to fund a trip all the way from Tokyo to the Galapagos Islands to shoot the colour scenes of lizards, wading birds, thick jungles and rocky cliffs that end up representing Goku's ultimate victory against Kronos, the god of time. Like "Wizard of Oz", Wim Wenders "Wings of Desire" these colour sequences are interspersed throughout the promarily black-and-white "The Kingdom". They are their own technical device to cut through the work-a-day world of contemporary Japan. Also, with their phantasmagorical symbolism, bring to mind the psychedelic ending of Kubrick's "2001" and cap off a film that is truly unlike either of Kanai's other Smiling Milky Way films, and most likely anything you have seen on screen before.
Posted by Chris MaGee at 5:37 AM