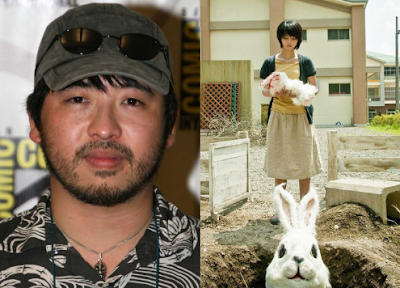 It seems that since legendary cinematographer Chistopher Doyle has been in Japan shooting Shinji Imaoka's "Underwater Love" he's been tagged to work on additional Japanese productions. The Japan Society Film blog is reporting that the 58-year-old expat Australian cinematographer is now going on to shoot Takashi Shimizu's next 3D film project titled "Rabbit Horror 3D". Not many details of this project have leaked out yet, although Dread Central is quoted as saying that "Rabbit Horror 3D" is " inspired by Alice in Wonderland as the story mainly focuses on a stuffed rabbit from an alternate world." That could also just as easily be described as inspired by "Donnie Darko", but six of one/ half a dozen of another as they say.

"Rabbit Horror 3D" will be the first time that actress Hikari Mitsushima will work with "Ju-on" director Shimizu, plus this will be the first time that Doyle's formidable cinematographic talents will be put to use on a 3D production. Take a look at the above right promo still for "Rabbit Horror 3D" to give yourselves a bit of an idea of what Japanese audiences can expect when the film is released in theatres there next year.
Posted by Chris MaGee at 5:31 PM