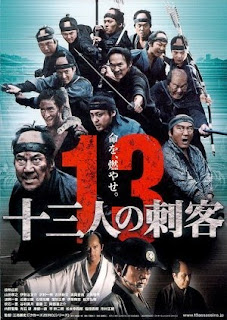 Can you start a review with expletives? For a review of Takashi Miike film, I’m sure that’s more common place than most, but this is the studio version of Miike, adapting a Chanbara film that isn’t well known in the West, with a large budget, several high profile actors and another script by his good buddy Daisuke Tengan. But expletives it deserves. This film absolutely, unequivocally, is the best Chanbara film made in the last 20 years. Yes, Yoji Yamada has made some very sweet, touching and poignant films with his Shuhei Fujisawa adaptations, but if Yamada’s film represents "The Ballad of Cable Hogue", then "13 Assassins" is "The Wild Bunch"; gritty, dirty and chock full of bloody mayhem.

Koji Yakusho plays Shinzaemon Shimada, a Shogun samurai who is called upon by Lord Doi (Mikijiro Hira) to help him stop the Shogun’s half brother from assuming a position of political power, there by causing greater instability in this time of peace. This is the twilight years of the Tokugawa period, and the power of the Shogun is declining. His half brother, Lord Naritsugu (Goro Inagaki) is sadistic, cruel and incredibly bored. He kills, maims and rapes on a whim, and to make matters worse, he murdered Lord Doi’s son and raped his son’s wife, causing her to take her own life. Lord Doi wants this devil dead. He gives Shinzaemon the task of assembling a rag tag bunch of samurai and devising a plan to ambush and kill Lord Naritsugu during his yearly travel to his own prefecture. This is a time of peace. Samurai no longer prove their worth in battle. In fact, most samurai live and die never knowing the taste of real combat. Shinzaemon sees his chance to die in battle, to live the life a samurai is meant to, to live and die for his lord, and jumps at the chance! 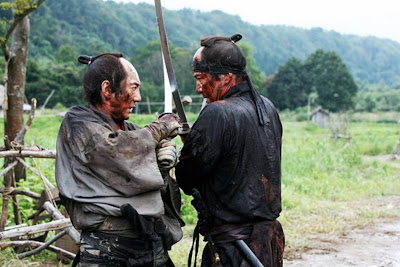 The film plays out in three parts. The first is the set-up and the gathering of the men, the second the game of chess as Shinzaemon and his band travel to a small town, setting about a chain of events that should force Lord Naritsugu right into their trap. However, things aren’t that easy as Naritsugu’s chief samurai is Hanbei Kitou (Masachika Ichimura), a former classmate of Shinzaemon. Hanbei can read Shinzeamons next move, but Shinzaeomon of course knows this, so a battle of wits marks the second part of the film. But then finally we come to part three, the town of the death! You see, Shinzaemon and his men buy out the small town they are using to set their ambush and turn it into a town of death, and set about total massacre. The fight begins!

This is classic Chanbara. Sure it’s a remake of Eiichi Kudo’s film of the same name, but this encapsulates so many other Chanbara films in its form that it’s a remake at its most base form only. There are obvious "Seven Samurai" references, whether it’s the 13th assassin Koyota (Yusuke Iseya) who is channeling Toshiro Mifune, plus plenty of mud, rain and a finale of such immense slaughter and carnage it will melt your brain. Before I get to that, I will mention one brief thing that sets this apart from other Chanbara and jidai-jeki made in the last two decades. Very few film in the beautiful 2.35:1 widescreen aspect ratio that became synonymous with these kinds of films, allowing the beautiful and classic framing and staging that filmmakers like Kurosawa, Kihachi Okamoto or Hideo Gosha mastered. Most opt for the bland 16:9 framing, which I’m sick of, and finally, Miike brings it back. Finally, we have a guy with balls making a Chanbara film, and it’s spectacular. Plus, he knows how to fill the wide frame with some incredible staging and blocking! Now, back to the carnage.

Without ruining the splendid grand finale of this film, know that the finale is what the film is all about. Like "Samurai Assassin" and a slew of other Chanbara before it, its beautiful setup for the first hour or so, followed by a climax you soon won’t forget. And this being Miike, it’s filled with blood and carnage! The sword play is spectacularly staged and executed, much of it reminiscent of "Izo", although in this case, the samurai can in fact die. In terms of the violence, yes, this is still fairly extreme for a studio film, but for Miike it’s restrained, but only in a small degree. In fact, I’d argue that the way he shoots some of the more violent set pieces, showing most of the impact off screen, but throwing the bloody aftermath at us in the form of rolling heads and splatters of blood, is rather ingenious in some of its execution and just as disturbing. So much of what unfolds is sheer genius, although, much like the finale of Audition, which was the brain child of Daisuke Tengan, although most of the credit goes to Miike, this is in the same vein. The combination of Daisuke Tengan and Takashi Miike is a beautiful thing.

Also, I should mention Koji Yakusho is incredible in the film, as is Hiroki Matsukata who plays the elder of the 13 Assassins, his crazy wide eyed stare giving Riki Takeuchi a run for his money. In fact the entire cast is rather exceptional, but that Koji Yakusho, he’s got balls.

"13 Assassins" is the bloody, dirty and grim Chanbara film of old. The samurai, trapped in their caste, forced to live out their duty to their lord regardless of whether they agree with them or not is not a pretty thing to live with, and this film presents it in all its unglamorous glory. This is the kind of film most directors only wish they could make. It may be a studio film, but its still from the writer and director of "Audition", and when it ends, you won’t soon forget that. It’s steeped in samurai lore, filled with the struggle between honour, duty and bushido, but it still totally subverts it all and presents it in such a grime and dark way. It’s fucking amazing.

Read more by Matthew Hardstaff at his blog.
Posted by Chris MaGee at 5:29 PM