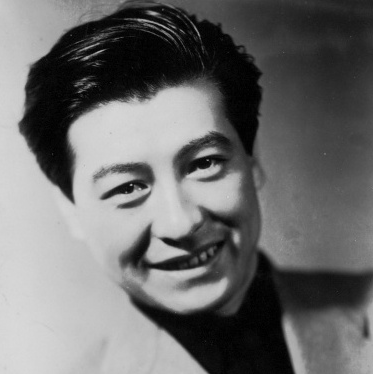 2010 continues to be a very tough year for fans of classic Japanese film. It was announced over the weekend that veteran actor Ryo Ikebe, best known for his roles in Masahiro Shinoda's "Pale Flower", Shiro Toyoda's "Snow Country" and Yasujiro Ozu's "Early Spring", died on Friday, October 9th after being hospitalized for septicemia. He was 92.

Ikebe was born in Tokyo in 1918 and studied at English Literature at Rikkyo University. He began his career at Toho Studio in 1941, but it wasn't his intention to become one of Japan's biggest screen stars. Ikebe started out as an assistant screenwriter and hoped to become a director, but it was his movie star good looks that had studio execs immediately push him in front of the camera. His screen debut came in '41 in the film "Fighting Fish", but Ikebe's new role as an actor was nearly derailed when he was drafted into the Japanese army in 1942. After serving in the South Pacific he returned to Japan and Toho in 1946.

Ikebe became one of the most ubiquitous and recognizable actors working in Japanese film. Not only did he make films with the aforementioned Shinoda, Toyoda and Ozu, but also such legendary names as Kon Ichikawa, Ishiro Honda, Minoru Shibuya, Hiroshi Inagaki and Senkichi Taniguchi. Ikebe's biggest screen success at home in Japan was his role as an honorable yakuza gangster in Toei's "Brutal Tales of Chivalry" series opposite screen legend Ken Takakura. The series ran for nine films and helped define the ninkyo-eiga or "chivalry film" genre of yakuza dramas. It was with a certain amount of irony that Ikebe was one actor who came forth in 1965 to blow the whistle on the ties between the Japanese film industry and the yakuza. At that time he declared that the major Japanese studios who sever all ties with organized crime, but despite his noble intentions the link was never truly severed.

Our deepest condolences go out to Ikebe-san's family, friends and colleagues at this time, and our thanks goes to Japan Zone for the details of Ikebe's remarkable life and career.
Posted by Chris MaGee at 3:49 PM