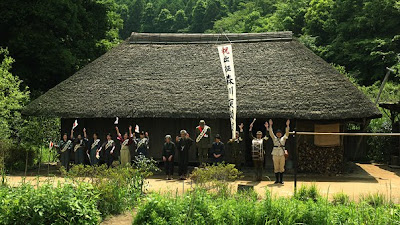 We're just a little over two weeks away from the 23rd annual Tokyo International Film Festival and the buzz continues to ramp up. We've already had announcements for the Japanese Eyes programme, but now we are getting word of two Japanese directors, one a young indie filmmaker and the other a living legend, who will have films entered in the festival's official competition.

98-year-old filmmaking and screenwriting legend Kaneto Shindo, the man behind such classics as "The Naked Island", "Onibaba" and "Kuroneko" will have his new film "Postcard" (above) featured at this year's fest. It chronicles the tragedy of a middle-aged soldier returning from overseas in WW2 only to find that his wife nad family have moved on with their lives as they never expected him to return from the front. "Postcard" will be going up against "Kichiku" and "Non-ko" director Kazuyoshi Kumakiri's new film "Sketches of Katain City". Based on a posthumous 1990 novel by author Yasushi Sato "Sketches" is just that - a series of stories of unfortunate and marginalized people living in the seaport city of Hakodate, Hokkaido. This will be an interesting film as Kumakiri is a native of Hokkaido and should bring some homegrown insights to the film's subjects.

Kumakiri's and Shindo's films will be competing for the coveted Tokyo Sakura Grand Prix against such films as Rowan Joffe's "Brighton Rock", Shawn Ku's "Beautiful Boy" and Mark Romanek's "Never Let me Go", to name only a few. Check out all the films that will be screening both in competition and out at this year's TIFFCOM between October 23rd and October 31st here, then check out the trailer for Kazuyoshi Kumakiri's "Sketches of Kaitan City" below.

I'm excited by both of these films. I have visited Hokkaido, so my excitement is doubled. Shindo's 'Postcards' is testament to a master who has endured like no other. Thank you for these pieces.