Which 56 Japanese films made the list of the 150 best animated films of all time? 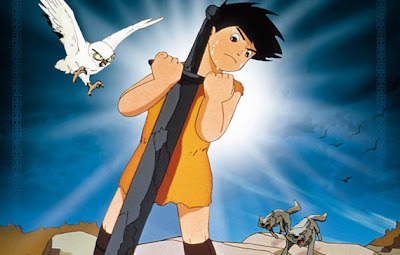 If there is one person online who has her finger on the pulse of art animation and Japanese art animation in particular it's Cathy Munroe Hotes. Her blog Nishikata Film Review is one of the best sources of information on Japanese animation on the web, so obviously it's a blog I read regularly (and you should too!) On a visit to Nishikata Film Review this week I saw a fantastic post that any of you out there interested in Japanese animation need to read. It's a list of the top 150 animated films of all time that was compiled at the Laputa Animation Festival held in Tokyo in 2003. This list, which Cathy points out has been reprinted and re-posted in the ensuing years with various misprints and errors, wasn't just put together by animation fans. It was voted on by 140 animators who wanted to have their say as to what they believed was the very best work in their medium. Cathy has done a wonderful job researching and cross referencing this list and has now posted it with all errors corrected for animation fans to look over and enlighten animation fans worldwide. What's great for us fans of Japanese film is that out of the 150 films listed 56 are from Japan. Which specific ones you may ask?

There are of course the usual supects on this comprehensive list - Hayao Miyazaki's "My Neighbor Totoro" lands at number 9 and films like Katsuhiro Otomo's "Akira", Osamu Tezuka's original "Astro Boy" series, Isao Takahata's "Grave of the Fireflies" and Mamoru Oshii's "Ghost in the Shell" follow it, but there are many films on the list that many North America-based Japanese film fans may not be immediately familiar with. These include Hayao Miyazaki's "Future Boy Conan" from 1978, Yugo Serikawa's "Little Norse Prince" (above), Kenzo Masaoka's "The Spider and the Tulip" from 1993, Kimio Yabuki's "Puss n' Boots" from 1969 and Taku Furukawa's "Coffee Break" from 1977. See what I mean about enlighten? Check out the trailer for Miyazaki's "Future Boy Conan" below and then head over to Nishikata Film Review here to see all the picks.

Aren't the 94 other films more interesting?

Japanese animation has become very popular around the world, but there are some very beautiful animations out of Europe and Russia that I've never known about until I moved to japan.

I'm not sure about other countries, but the USA seems quite ignorant when it comes to world animation.

A belated thanks for the bump, Chris ;-)

ACGalaga is right that the Japanese have a high regard for international animation. There are much more Eastern European animators available on DVD in Japan than in any English language country - and they often host wonderful exhibitions honouring international animators. The Laputa Festival and Animation School was actually started because Yuri Norstein told his Japanese peers that he was surprised that they didn't have such an institution. I actually came across the 150 list while trying to find out who had won the Norstein award at Laputa, which seems to be given out semi-annually.