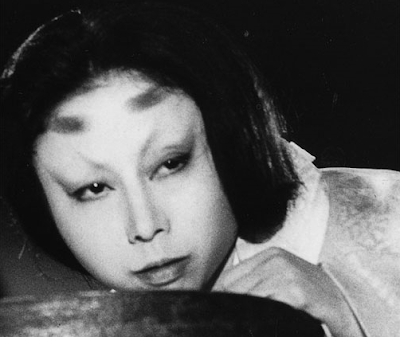 It was only a short time ago that the folks at Janus Films had released a new 35mm print of Nobuhiko Obayashi's psycho experimental horror film "House" which went on to tour North American repertory theatres. Of course this was a lead up to the Criterion Collection release of the film due in stores on October 26th. It was great news for fans of classic Japanese horror films, and this week Japanese film programmer/ blogger and kaiju film expert August Ragone reported on what will hopefully be another Japanese horror film following this same promotional strategy.

Janus Films has announced that a new 35mm print of Kaneto Shindo's 1968 film "Kuroneko" will begin a tour of select North American theatres starting on October 22nd. The film stars Nobuko Otowa and Kiwako Taichi as a pair of evil feline spirits who haunt the Rashomon Gate in medieval Kyoto. In the film a brave samurai, played by Kichiemon Nakamura, is sent to confront these evil spirits, but finds that he is lured in by their beauty and charms. "Kuroneko" has long been available in the UK on a Masters of Cinema DVD (check out the MoC trailer below), but if this tour of North American theatres follows the route of Nobuhiko Obayashi's "House" then this film will most likely be joining Kaneto Shindo other seminal horror film "Onibaba" in the Criterion Collection in the near future.

To check out which cities will be hosting this new 35mm print of "Kuroneko" check out the page set up by Janus Films for the tour here.