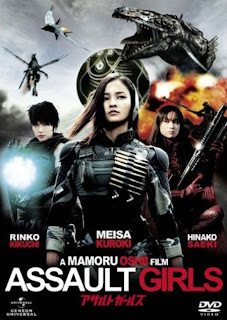 I have a frightening and shameful confession to make... When I take naps I listen to new age ambient music. There! It's out! I expect your respect for me to plummet and I will soon discover that my Facebook friends list has shrunk in half. Still, I can't help it! That music... actually I'm not sure you can call it music in the proper sense... is so damn relaxing it puts me right out. Maybe aural valium might better describe this stuff. Well, regardless, it's pretty, unobtrusive and it lulls you into a near drugged sense of well-being. Why would I be starting off my review of Mamoru Oshii's live-action sci-fi film "Assault Girls" with this terrible confession? The reason is I could think of no better equivalent to explain the experience of watching what I had thought was going to be a futuristic action flick par excellence. Instead Oshii has delivered a very beautiful and sonambulant piece of new age cinema... with heavy artillery.

Most of you probably saw the trailers online for "Assault Girls" in the months leading up to its release. You were, like I was, dazzled by the acrobatic bare-knuckle brawling, super mecha robots blasting through the sky, giant mutated Sand Whales that made the sandworms from Frank Herbert's "Dune" look like fishing bait and handheld firepower that could flatten a skyscraper if need be. More than a few of you were probably thinking that not only would "Assault Girls" deliver more action than the already action-packed 8-minute “Assault Girl: Kentucky no Hinako” from Oshii's 2007 omnibus film “Shin Onna Tachiguishi Retsuden”, but it would finally explain the back story behind the duel between Hinako Saeki's Colonel and Rinko Kikuchi's winged Lucifer characters that took place in "Assault Girl 2", the third segment in 2008's “Kiru ~ Kill”. In terms of action, the line, "They put all the best scenes in the trailer" has never been more true. This really is the case with "Assault Girls". Out of its 65-minute running time maybe 10 of those minutes features the kind of action that convinced us to see the film in the first place. Thankfully the Colonel's and Lucifer's back story, as well as the history of the ruined world that they inhabit, provides the one real surprise for Mamoru Oshii fans. 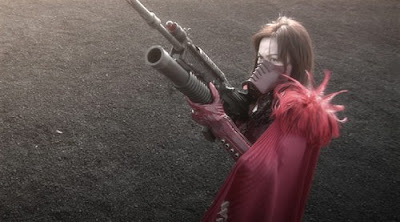 "Assault Girls" begins with a lengthy English-language voiceover introduction that explains not only 20th and early 21st-century history, but also humanity's concept of self. At least that's what I think it was about. In usual Mamoru Oshii style the intro is a verbal maze of pseudo-intellectual babble like, "The intrinsic value of people's enthusiasm is unshackled by a real or fictional environment. So long as the world accords recognition for the applied fulfillment of this enthusiasm it stands that people will not lose touch with their own reality." The lecture lasts for the first 5-minutes of "Assault Girls", but it is finally revealed that the world that Colonel, Lucifer and the two newcomer characters Gray (Meisa Kuroki) and Jager (Yoshikazu Fujiki) is in fact a virtual reality role-playing game... a game that Oshii fans will instantly recognize. It turns out that "Assault Girls" takes place in the same world as Oshii's first live-action film "Avalon". That film told of a dystopian future in which the populace have become addicted to virtual RPG (can anyone say World of Warcraft???) and consequently they spend the better part of their days jacked into this fantasy world. It's an interesting full circle move for Oshii, but the problems that plagued "Avalon" 9-years ago haven't been remedied in "Assault Girls", in fact they've been magnified.

The razor thin plotline of "Assault Girls" is this: the aforementioned Colonel, Lucifer, Gray and Jager are all lone players of Avalon, existing on the margins of the game as they search for the the mythic Nine Sisters, the programmers of this virtual universe. The only problem is that none of them can achieve their goal alone. They must join forces to and pool their skills to finally break out of the virtual limbo they exist in and graduate to the next level of the game. It's true that many action films operate on much less plot than this, but like "Avalon" the characters in "Assault Girls" spend more time brooding silently than attempting to advance whatever plot there is. This is the same problem that derailed sections of "Avalon", that and Oshii's insistence that his actors learn their English dialogue phonetically. With little plot and actors who are mangling their lines Oshii relies on the beauty of the images. The imagery is indeed hauntingly beautiful (and it doesn't hurt that Kuroki, Saeki and Kikuchi are very easy on the eyes), and combined with the ambient score composed by Kenji Kawai "Assault Girls", a film that should have gotten our pulses racing, ends up soothing us like an aromatherapy spa treatment. It's not what you really need from a sci-fi action film.

Seeing that this is the fourth visit that Oshii has made to his virtual role-playing world I would say that the best way to put "Assault Girls" into context (and possibly market it to fans) is to include in a DVD package with all the "Avalon" and "Assault Girl" films. It would take the pressure off "Assault Girls" to function as a stand alone film. As part of a DVD set it could be appraised as simply an extended and languidly paced chapter in an ongoing saga... or just another level in a video game as the case may be. Taken on its own though "Assault Girls" just simply doesn't have the narrative chops or enough excitement to hold all its prettiness together.
Posted by Chris MaGee at 12:19 PM

I also view the film through a flutter of sleep.

I love Mamoru Oshii, and this film is real pretty, but maybe not one of his more moving pieces.

Got to give him mad respect though for being a creative as well as an incredibly knowledgeable director.