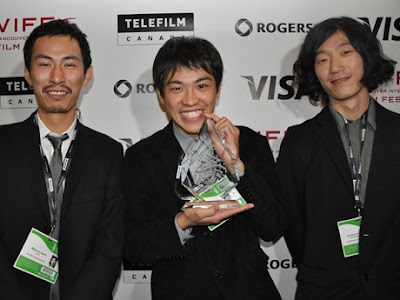 The 29th annual Vancouver International Film Festival has still got a week to go before wrapping up on October 15th, but a young Japanese filmmaker has already been given one of the festival's biggest honours. 23-year-old Satoru Hirohara (above center) received the Dragons & Tigers Award for Young Cinema for his feature directorial debut "Good Morning to the World!" The film chronicles the the journey of discovery that introverted teenage boy goes on after his world is turned upside down by a classmate's suicide and the death of a local homeless man. Hirohara shot the film as his graduating project at Musashino Art University and it has already been honoured with a special jury prize at this year's Pia Film Festival. The jury at VIFF lauded Hirohara for his "fresh and frontal way of addressing his society's problems," and they were "pleased to salute the maturity of this very young director." Seeing that the Dragons & Tigers Award comes with a $10,000 CAD prize we can only hope that Hirohara will be bringing us another film in the very near future.

Thanks to Tokyograph for this great piece of news, and to Minkei News Online Vancouver for the above image.
Posted by Chris MaGee at 12:18 PM