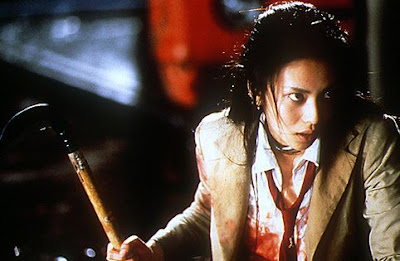 Probably the biggest news amongst fans of Japanese film this week had to have been that Kinji Fukasaku's cult classic "Battle Royale" will finally be getting a North American DVD release. Fukasaku's dystopian 2000 film has been the introduction for thousands of young Japanese film buffs worldwide, but despite its popularity it has been unavailable on a legitimately released Region 1 DVD on these shores. Some fans had whispered that the highly violent content of the film, which tells the tale of a class of high schoolers who are forced to battle it out on a deserted island, was what was keeping it from being released on DVD in America and Canada. It's true that in the wake of a rash of school shooting in the U.S. in the past 10 years people were a little wary of a film like "Battle Royale", but the main reason for the decade long wait time for this film to come to DVD was that Toei, the studio that produced and distributes "Battle Royale", had been asking for an exorbitant amount of money from already cash-strapped North American DVD distributors.

Obviously no price tag for "Battle Royale" was announced publicly, but we can assume Toei's asking price was with the budget of Anchor Bay Entertainment as they will be releasing not only the original film, but "Battle Royale 2" on Region 1 DVD in 2011. May fans are saying that it's about time, but let's hope that all thye people who have already got "Battle Royale" on Region 2 or grey market DVDs will replace them with this new release. Anchor Bay should pack the disc with extras to make sure that they make back whatever large sum was paid out to Toei.

To work all of you "Battle Royale" fans into a frenzy of this news here's the thatrical trailer for you to play on repeat until Anchor Bay delivers its new DVD for all of you. Thanks to Tokyograph for this news.

I'm not sure about this. There've been legit DVD releases of Battle Royale and a Battle Royale I & II box set available in NY for quite awhile. (Not that I or anyone I know really cares abut the K.F. son's sequel.) You can find these DVDs onine at Amazon.com, too. I think the news supposedly is that the original is finlly getting a theatrical release in North America.