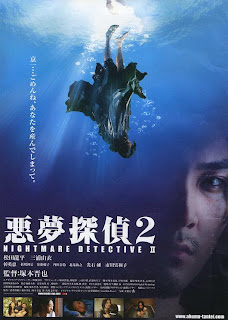 Everyone has heard Franklin D. Roosevelt's famous quote from his 1933 inaugural speech, "We have nothing to fear but fear itself." I couldn't help thinking of this quote over and over again while watching Shinya Tsukamoto's sequel to his 2006 horror crossover film "Nightmare Detective". Tsukamoto has become internationally recognized for exploring obsession, transformation, lust and fear throughout his 25-year filmmaking career, but with 2008's "Nightmare Detective 2" he attempts to take his audience deeper into the dark corners and crevices of fear than he has ever done before with the end result being both masterful and maddeningly obscure.

As a refresher the original film starred Ryuhei Matsuda as Kyoichi Kagenuma, the Nightmare Detective of the title, and follows the manhunt for a psychopathic serial murderer who convinces people to kill themselves via cell phone. Police detective Keiko Kirishima (pop singer Hitomi) asks for Kagenuma's help to get into the minds and dreams of those involved in the case to stop this spree of suicide/ murders from continuing. Tsukamoto gave us teasing glimpses of Kagenuma's youth in the first "Nightmare Detective", but I at least felt that we never got enough information to ever really know who this sullen young psychic really was. "Nightmare Detective 2" delivers on this lack of background for Ryuhei Matsuda's character. 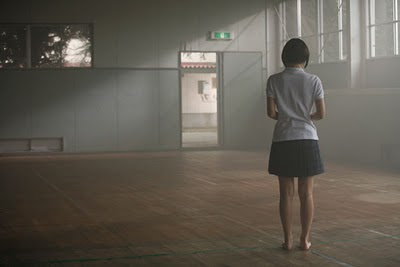 Nearly half of the running time for "Nightmare Detective 2" is told in flashback, or flashbacks in the form of recurring nightmares that are plaguing Kagenuma. Night after night the details of Kagenuma's childhood play out in his dreams - his fragile mother Itsuko (Miwako Ichikawa) being possessed by sudden terror, terror inspired by her own little son. Kagenuma's father (Ken Mitsuishi) does his best to protect his son from his wife's violent panic attacks, but he can't be around 24 hours a day. The audience witnesses Itsuko hiding on top of wardrobes to escape her boy, horrific attempts to drown him in the bathtub and finally Kagenuma is witness to her suicide in an upstairs bedroom. Terrifying indeed, especially given that Tsukamoto casts an adorable child actor to play Kagenuma as a boy. This young version of Kagenuma is already frightened by the psychic visions that plague him such as a group of school children who died in a bus accident and the ghost of his won mother who crawls through his window nightly. Each morning the now adult Kagenuma is jolted awake by these horrible visions, but instead of finding some peace during waking hours he is confronted by a high school girl with her own nightly terrors.

Yukie (Yui Miura) and her friends fear for their lives after they begin having nightmares about a classmate who they once bullied. This girl, Kikugawa (Hanae Kan), appears to them in their dreams and throws a glass of water on them. Whichever girl is dowsed in the dream ends up dying under mysterious circumstances in waking life. Kagenuma wants nothing to do with Yukie and her nightmares, but as she tells him more about Kikugawa, how she was suddenly gripped by unexplained terror, Kagenuma wonders if this case may provide answers to his own mother's affliction.

It's hard to say if "Nightmare Detective 2" is a sequel or a prequel to the original film. Matsuda is the only character that has carried over from "Nightmare Detective", but linear progression from the first film, or the events in "Nightmare Detective 2" don't seem to be what Tsukamoto is after. What the primary purpose of "Nightmare Detective 2" is is to unnerve and frighten its audience and it does just that again and again. Tsukamoto does this in two ways - he constructs his film almost entirely using claustrophobic close-up and he employs some truly effective (and frightening) sounds effects. One of the very few long shots that Tsukamoto uses in the film are in Yukie's nightmare and after the tight, hand held close-ups you'd think a shot with some breathing room would be a relief, but Tsukamoto uses to terrifying sound work and music to make a girl holding a glass of water and walking backwards one of the scariest images I've seen in film for a very long time.

Still "Nightmare Detective 2" doesn't get everything right, although I would say that it greatly improves on the original film, a work that I found disappointing. Fear is a constant in "Nightmare Detective 2" whether it is paralyzing its characters or being whispered by Kagenuma's mother. Something is genuinely driving people mad with fear, but to avoid spoilers all I can say is that the reason behind this is revealed with a bit of a clunk near the end of the film. I would have expected more than the easy explanation given, although it does leave the story of "Nightmare Detective" open for additional sequels/ prequels with the character of Yukie possibly being Robin to Kagenuma's Batman. "We have nothing to fear but fear itself," but Tsukamoto at least gives us a hope that more "Nightmare Detective" films will bring more chills, otherwise the only thing we'll have to fear is the curse of the half-baked movie franchise.
Posted by Chris MaGee at 2:16 PM