Live-action "Gantz" to get world premiere in U.S. theatres... with English-language dubbing? 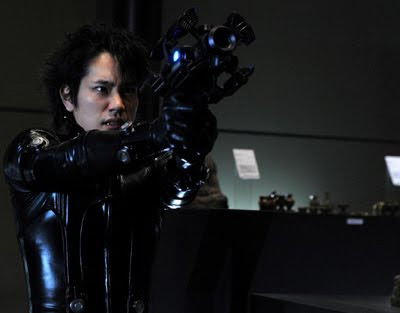 One of the most hotly-anticipated Japanese films of 2011 have to be the multi-part live-action adaptation of Hiroya Oku's sci-fi/ fantasy manga "Gantz" directed by Shinsuke Sato. As we reported last October ARASHI member Kazunari Ninomiya and superstar actor Ken'ichi Matsuyama will be portraying a pair of college friends who find themselves ressurrected after being killed by a train. They are given a mission by a mysterious force called Gantz to kill aliens hiding here on Earth. Following in the footsteps of the successful "20th Century Boys" trilogy "Gantz" will be brought to the screen via two feature films.

Originally it was reported that both "Gantz" films would see a Japanese theatrical release next year. This is true, but according to a report posted at Anime News Network Japanese audiences won't be the first to catch these films. Apparently Viz Pictures, who have been behind a number of exclusive one and two-night theatrical releases of Japanese films in the U.S. and Canada, have negotiated to present the world premiere of the first "Gantz" film on January 20th at a select number of U.S. theatres. These screenings will also be followed by exclusive pre-taped interviews with Matsuyama and Ninomiya.

This is exciting news indeed, but there's one glitch. Like many of Viz Pictures' North American theatrical releases "Gantz" will apparently be dubbed into English for its world premiere! If this were one of Viz Pictures' general release films this would be an uncomfortable but understandable compromise, but for the film's world premiere? I would have hoped that Viz would have considered a two night engagement for "Gantz", the first night (and premiere) being screened in Japanese with English subtitles followed by a second night with a dubbed print. Have your say in the comments about this - Are you happy that "Gantz" will be receiving its world premiere on these shores... with English-language dubbing?
Posted by Chris MaGee at 3:59 PM

The two things Americans hate the most are foreign people and reading.

If we're to get around looking dem foreigners fer and hour somethin' it best be dubbed into god's language.

(sarcasm in case you couldn't guess)

I'm confused why Viz thinks it's a good idea to release it dubbed. I'm sure there is a lot of action and maybe a lot of overlap, but I'd much rather hear the original actor's voices than some random people who will just annoy me. I'm a fan of several of the actors in the Gantz film so I'm really disappointed they chose to dub it. But I'd rather have my chance to see it on the big screen than not at all (although I'm really not sure how much I'll enjoy it because of the distracting dubbing).

I know there has been a movement trying to contact Viz telling them that they dont want dubbing and really would love subbing.

Terrible, not all I am sure, but many people like myself are going purely to see it because they are familiar with the actors. I want subs, dubs to me have ruined just about everything Viz has brought here. Even with Deathnote in theatres here was shown on two nights, dubs on one and subs the next. I wish they would continue to do that.