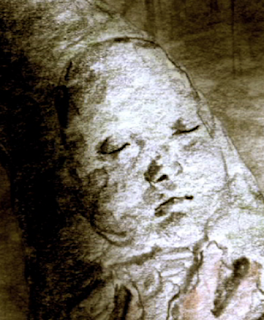 So many children are picky eaters, but only a few of them are picky eaters with a conscience. That is the case with young Midori, the heroine of Keita Kurosaka's animated tour de force "Midori-ko". The very beginning of the film features child-like crayon drawing telling us of little Midori and how she hates to eat animals. This little girl goes the vegan route and only wants to eat vegetables. As a young woman she holds true to her conviction even though the surreal world that the crayon drawings gives way to is one that is dealing with a severe food shortage. Midori continues to subsist on vegetables and the occasional bowl of soba, much to the chagrin of those around her. "Eat some protein!" the bark at her, but Midori is unmoved. One night though Midorti is introduced to a vegetable that even she won't eat. This vegetable, named Midori-ko, has arms, legs and a face sprouting out of its gourd-like body. It's intelligent as well. Before young Midori can even begin to puzzle over who or what this creature might be she is confronted with a group of scientists who may or mat not be the creators of Midori-ko as an alternate food source, part animal and part vegetable. Midori must battle these sinister forces, her ravenous neighbours and her own hunger to keep the mysterious Midori-ko safe.

For a world brimming with fear over environmental destruction, global warming and over population Kurosaka's "Midori-ko" plays out like a paranoid fairy tale, a storybook inversion of Richard Fleischer's 1973 sci-fi classic "Soylent Green", but in this case the food source isn't made out of people, but is in itself a sentient anthropomorphized being. In many ways this brilliant new food source is more human than those around her/ him. Keita Kurosaka, a veteran animator and professor in the Department of Imaging Arts and Sciences at Tokyo’s Musashino Art University, populates the world around Midori-ko and its young charge Midori, with wildly imaginative and often frightening animal/ human/ vegetable hybrids. Its as if ethical eating advocates were having a nightmare of a post-GMO, artificial additive-steeped, irradiated apocalypse in which people really are what they eat. This is a world driven by hunger and the senses, in fact the five scientists who discover rather than create this miracle food/ child are represented by Kurosaka as having eyes, noses, ears, mouths, and hands instead of heads. They are the personification of an entirely sensual and illogical world. 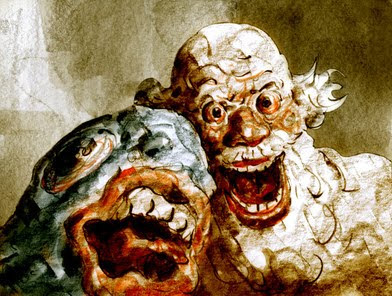 Fans of popular anime and Japanese art animation have been used to fantastic imagery and chimera-like characters. I would even hazard to say that some of us have become a bit jaded. What makes "Midori-ko" so absolutely refreshing is that Kurosaka is presenting his wondrous world to audiences that will leave even the most hardened animation enthusiast with their mouth hanging open. No ultra-realistic CGI animation here - Kurosaka employs a sketchy charcoal style out of which his characters emerge out of the dusty chiaroscuro. It is as if Kurosaka were channeling the spirits of Dutch proto-surrealist Hieronymus Bosch and French caricaturist Honoré Daumier to give life to his world. The creatures - apple-headed schoolgirls, naked women with fish heads, lecherous old men with Biblical beards - that surround Midori pulsate with energy and seem to congeal and dissolve out of Kurosaka's loose, hand drawn imagery.

Now, before you think, "Young female heroine, magical or fantastical plot with a cast of monstrous creatures... 'Spirited Away'!" let me warn you that "Midori-ko" isn't a film for children. Well, let me clarify that, it's not a film for young children. Yes, on the surface and certainly at its beginning "Midori-ko" seemed to me to be a film that may not have been made expressly for kids, but could definitely be family friendly. As it progresses though it gets increasingly sinister and once it draws to a conclusion Kurosaka's sensual world turns into an orgy of rutting, gnashing of teeth and finally cannibalism. You'd have to leave the light on for a good few years before young children could get over this. It's the fact that "Midori-ko" is so difficult to categorize that makes it so special though. This film definitely is not "Spirited Away", but it left me in the same awed and bewildered head space as that Hayao Miyazaki classic. "Midori-ko" is its own unique kind of animated classic, one that takes today's present day environmental concerns and takes them into realms of imagination that most of us would never have dreamed possible. Highly recommended!
Posted by Chris MaGee at 4:01 PM

Midori must battle these sinister forces, her ravenous neighbours and her own hunger to keep the mysterious Midori-ko safe.
meizu pro 5
meizu mx5
xiaomi mi5