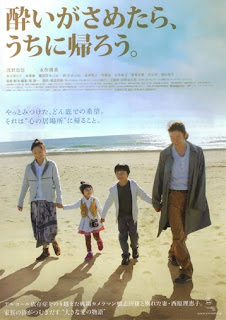 Alcoholism is a tough disease. Not only does it hurt those around the the alcoholic just as much as it hurts him or her, but as a doctor in Yoichi Higashi's latest film "Wandering Home" points out "Alcoholism is the only disease where people don't really feel pity for the sufferer." I'm not sure if this statement is entirely true, but it is true that so many of us who can easily navigate after work drinks or holiday get togethers sometimes have trouble appreciating just how much of a mine field these occasions can be for an alcoholic. "Why can't you just have a couple drinks?", "Do you really need to drink tonight?", "Why do you have to embarrass yourself like this?" These are all questions that alcoholics are asked by those closest to them, but it would be hard to imagine asking someone with Parkinson's Disease, "Why can't you just not have tremors tonight?" Still having grown up in an alcoholic household I know it's not as simple to describe the disease as just a need to be drunk. I think that there's a whole brew of unresolved issues at the heart of every alcoholic and that without looking at those patterns of emotional and mental behaviour there's not hope of ever putting the cork in the bottle permanently. It's this "fearless moral inventory" that Higashi and the cast of "Wandering Home" present so beautifully, and it's what ends up making the film such a great success.

Tsukahara's (Tadanobu Asano) stock and trade is being a writer and photojournalist, but most of his time is spent wandering from bar to bar near his home. The end of each night comes when he passes out cold or is thrown out and from there he heads to the convenience store to grab the beer and gin that will get him through until morning. Tsukahara's mother (Yoshiko Kayama) pleads with him to at least eat something before pouring liquor down his throat, but her words go unheeded; that is until one night when Tsukahara throws up a geyser of blood into the toilet. This has happened before, but not this severely. An ambulance is called as is Tsukahara's ex-wife Yuki (Hiromi Nagasaku). She arrives in surprisingly light spirits and gently jokes with her ex-husband, but it's easy to see that her casualness is a defence built up through many nights like this. Most importantly Yuki and Tsukahara have two young children and Yuki's laissez-faire attitude is there to shield them from the worst of their father's affliction. 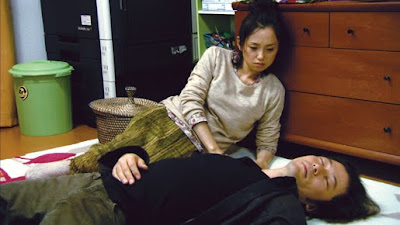 Tsukahara heads off to the hospital for his routine patch up, but this time things are different. This time the doctors say his condition has gone past the point of no return - his liver is shot and his brain is actually showing signs of atrophy. It's time to finally stop drinking or die. Tsukahara says he's ready to finally get sober, but Yuki is suspicious. Still she asks a doctor friend to recommend a course of action. Tsukahara goes on medications that will produce severe illness if they are combined with alcohol, but a night out at a local sushi restaurant quickly goes from pickles soaked in sake to beer and then to shochu. The night ends with a very ill and battered Tsukahara. There's no choice but to check himself into a psychiatric hospital for a monitored rehab program, and this is where "Wandering Home" goes from the usual queasy cautionary tale to a deeply empathetic look at one man's struggle with alcoholism.

Director Yoichi Higashi, who is probably best known for his award-winning 1996 film "Village of Dreams", returns to the director's chair after a six year absence to bring the autobiographical novel "Yoi Ga Sametara, Uchi Ni Kaero (I'll Get Home When Sober)" by real life photojournalist and author Yutaka Kamoshida to the screen. Knowing that the trials and tribulations in "Wandering Home" are based on the actual events of Kamoshida's struggle with alcoholism and his relationship with ex-wife and manga artist Rieko Saibara gives Higashi's film that much more punch, but what really brings the film alive for audiences are the performances of its stars. Tadanobu Asano took a crack at playing alcoholic novelist Osamu Dazai in last year's disappointing "Villon's Wife", but here he really nails his character, imbuing Tsukahara with a boyish charm despite the horrors he witnessed as a war photojournalist in Southeast Asia. Higashi helps us to remain empathetic to Tsukahara even while showing him abusing Yuki. This is achieved by clever touches of magic realism that shows Tsukahara's violence without reducing his humanity. Hiromi Nagasaku gives Yuki a remarkable level of complexity. Not only must she be strong as steel in order to cope with her ex-husband's suicidal drinking, but she must remain smiling and gentle for her two young children. Once Tsukahara enters in-patient treatment Higashi offers us a wonderful ensemble cast and gives Asano a chance to do (at least in my opinion) some of the best work of his already impressive career.

"Wandering Home" is the kind of drama that rarely makes its way to Japanese theatres. It's a film that is at the same time emotionally affecting without being weepy and manipulative. It's story of one family's struggle against alcoholism is universal one that will hopefully find acceptance and recognition with audiences both in japan and overseas as well.
Posted by Chris MaGee at 9:45 AM