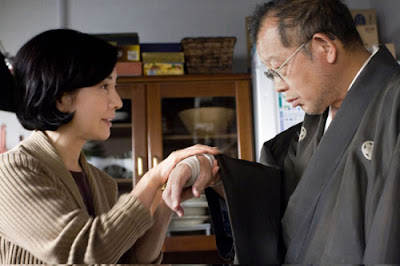 Looking over the list of nominees in the major categories you see the same five films being repeated again and again... and again - Sang-il Lee's "Villain", Yoji Yamada's "Younger Brother", Tetsuya Nakashima's "Confessions", Takashi Miike's "13 Assassins", and Izuru Narushima's "A Lone Scalpel". Not to say that these films (at least "Confessions" and "13 Assassins") aren't deserving of their nominations, but a little variety would have been nice. Not to toot our own horn here at the Pow-Wow at all, but just taking a look at our favorite picks of 2010 and all the films we've reviewed this year and it makes us wonder why films like "Golden Slumber", "Wandering Home", "Oh My Buddha!", "Sawako Decides" aren't represented amongst the nominees. It seems like the Academy bowed to some extent to international successes like Shinobu Terajima's astounding performance in Koji Wakamatsu's "Caterpillar", but besides that they stick almost entirely with the big names, even Yoji Yamada whose "Younger Brother" (above), a remake of Kon Ichikawa's 1960 classic, received almost universally bad reviews.

You can check out the major nominations below courtesy of Tokyograph who also have the full list of nominations posted here. There aren't that many surprises amongst those either we're afraid.


Picture of the Year:

Animation of the Year:

Director of the Year:

Screenplay of the Year:

Outstanding Performance by an Actor in a Leading Role:

Outstanding Performance by an Actress in a Leading Role:

Outstanding Performance by an Actress in a Supporting Role:

I've always wondered how the US Academy Awards justified their choices. Take "Gladiator", for instance: If it's the best film with the performance by the best actor, doesn't it follow that the film's director did the best job that year? Not according to voting. I'm surprised there's not even less variety.
With the Japanese awards, "Ototo" seems like a choice meant to involve older filmgoers. The rest of their choices may be repetitive from category to category, but I'm amazed to see 13 assassins, Villain and Confessions recognized together. These aren't easy or award-bait films. Now if Ototo wins, I'll be furious…
I expect a director/script/actress/film sweep by Confessions, though they might reward Villain with screenplay.
Predictions?