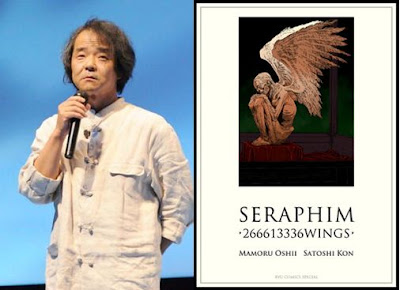 It was back in September that we reported on how portion of a 1995 manga, "Seraphim: 266,613,336 Wings", co-authored by Satoshi Kon and Mamoru Oshii was going to be re-published in Monthly Comic Ryū Magazine. We obviously had a lot of Oshii and Kon fans reacting very positively to this on our Facebook page and in the comments, so here is some added news relating to "Seraphim" for all of you out there.

This week Anime News Network reported that Mamoru Oshii has stated that he will be writing a complete novel of the story chronicled in "Seraphim: 266,613,336 Wings". Apparently the manga, which tells the story of a futuristic world where a lethal pandemic called "The Angel Disease" has ravaged society, was never truly completed by Kon and himself. Oshii wrote the original story and Kon was responsible for adapting it into a manga but only a part of the story originally appeared in the pages of Animage back in the 90's. Now Oshii is re-visting the material with an eye on releasing a full novelization of "Seraphim: 266,613,336 Wings" by the spring of 2012.

Japanese fans of Oshii will get to read the prologue of this new novel when the latest re-published installment of "Seraphim: 266,613,336 Wings" appears in the March issue of Monthly Comic Ryū Magazine, set to hit Japanese newsstands on February 17th. Now North American fans can just wait and hope that this will see an English translation sometime within the next decade...
Posted by Chris MaGee at 10:24 PM