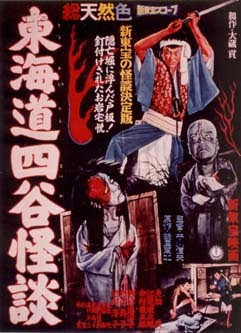 It doesn't take long to accept that the world of Nobuo Nakagawa's "Ghost Story of Yotsuya" contains spirits and demons. The lurid colours, dark shadows and definite lines between the good of humanity and the bad provide all the background you need to easily believe that the dead (especially those that have been dispatched wrongfully) can return to the corporeal world. If it takes awhile to actually witness the ghostly apparitions, it's for good reason. Nakagawa has built his film around a classic tragedy and spends most of the plot showing the evil characters doing all sorts of evil things without any retribution - until they wrong the one person they shouldn't.

Ghost Story of Yotsuya is all about mood. Nakagawa is in no rush to show you his ghosts as he much prefers to create the environment of each scene to give you that feeling of impending doom. Brightly coloured lights suddenly spring up, huge portions of the frame are in deepest blacks and characters are separated from each other via all manner of props to indicate that karma will soon level the playing field. Given that the story is derived from the popular 19th century kabuki play, it's understandable that Nakagawa's characters don't have a great deal of subtlety to them and that the performances are quite broad (and really play up the good/evil morals of each person). You can be forgiven if you become a bit impatient for the ghosts to show because the foreshadowing is constant, the sets are lit in preparation and the sound field is full of anticipation. So when the fury of the woman scorned has been unleashed, you've been primed nicely for it.

The story begins with a ronin named Iemon who desperately wants to wed the pretty Oiwa. He begs her father for her hand in marriage, but the elder man mocks him and is killed when Iemon cannot control his rage. Simultaneously, Iemon's servant Naosuke is rejected by Oiwa's sister Osode and drunkenly kills a man he mistakes for Osode's boyfriend. Iemon and Naosuke agree to lie to the sisters about what happened and swear to them to avenge their father's death. But once you've committed one evil act, the others become easier...Naosuke convinces Iemon to murder Osude's boyfriend leaving the path clear for himself. After fathering Oiwa's child, Iemon sees an opportunity to marry into a wealthy family and, with Naosuke's constant goading, sets another plan into action to clear his path to an easier life. Iemon does show a certain amount of strain and possibly even guilt from his terrible acts, but it doesn't stop him from committing them - he'll even take away the mosquito netting protecting his infant son for a quick dollar.

At 76 minutes, the film doesn't bother much with the lead ups to the heinous acts - it shows the audience what they have done, that their fates have been sealed and then proceeds through to the deserved vengeance at the end. The stone faced ghosts use themselves as decoys to inflict further carnage and their appearances in the film must have provided some of the templates that Nakagawa carried over to his 1960 masterpiece "Jigoku". That film, from just a year later, depicts Hell in all manner of gory detail. This must have been the place from where Iemon's demons came and certainly where he eventually ended up. A classic of the genre and typically thought of as the best version of the many film adaptations released (apparently over 30).

Read more from Bob Turnbull at his blog.
Posted by Chris MaGee at 10:17 PM