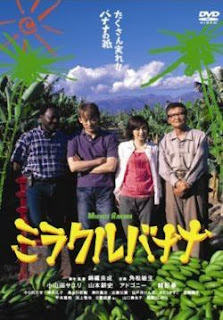 “The movie is fiction, but the banana paper project is a reality.”

Remember that as you watch. Or rather, allow yourself to forget. There’s a strong aroma of truthiness emanating from “Miracle Banana”, writer/director Toshinori Nishikiori’s dreamy drama about using banana trees to make paper in Haiti. Elements of the story are factual—age-old Japanese paper-making can work with Banana tree pulp, and paper is such a rare commodity in Haiti that students have to go without so much as a notebook—but Nishikiori’s film is very fictional in the telling, especially in regard to its characters. It’s a strange approach in that it reads very much like a true story, but only spare elements of the tale happened. It’s almost as if “Miracle Banana” is a wish, willing for it’s events to come true.

Around 24 years old, Sachiko (Sayuri Oyamada) lacks a clear career path and as a lark decides to work for the ministry of foreign affairs so she can see the world. The committee interviewing her can scarcely believe their ears when she volunteers for a 2-year stint in Haiti: Is she sure? Will she commit to the full term? Sachiko smilingly nods her assent and is given the job. Only afterward does she consult an atlas and discover the difference between where she thought she was going—Tahiti—and where she’ll be flying in a matter of days. No matter: confident and bright, she is open to the experience. Once she arrives she is taken aback by the degree of poverty (it is the poorest country in the Western hemisphere, lacking basic infrastructure), but accepts that the amenities she’s used to are comparative luxuries. The staff at the Japanese embassy task her with ascertaining how familiar Haiti’s children are with Japan and Japanese culture, so she visits a rural school to find out firsthand. After her brief amusement at the kids’ knowledge (like most children, they know Pokémon and sushi) she learns that the school can’t afford basic teaching supplies such as paper. Perhaps the TV documentary she saw about how Japanese used to make paper by hand can offer a solution…? Cue a trip to Japan to convince papermaking expert Takashi Yamamura (a wonderfully understated Ken Ogata) to travel to Haiti and teach people his craft. 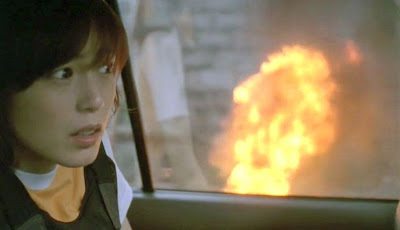 Sachiko’s ebullient spirit is the driving force behind most everything that happens in the film, and Oyamada deserves a healthy share of credit for the film’s artistic success. Rather than being an absurd caricature of a cheerful Japanese girl with ganbatte spirit—distinctly possible given some of the film’s situations—she brings a warmth, subtlety, and believability to the role which proves vital. A petite young Japanese woman walking unescorted through the ruined slums of Port-au-Prince could be the stuff of a harrowing thriller, but nothing bad happens to Sachiko seemingly because she cannot imagine anything bad happening; she exudes a forthright friendliness against which hostility would simply dissolve away. Played as a genuinely helpful, confident, dedicated, and empathic person, Sachiko attracts everyone around her and brings out the best in them, from sour coworkers to children in the street to ojisan artisans. Oyamada never strikes a false note. It’s a star-making performance which has so far yielded too few featured roles.

“Miracle Banana” is in no hurry to arrive at the key paper-making narrative. A good chunk of the film follows Sachiko as she finds her way in the countryside, in the city, and with the people, and these scenes have an almost documentary quality. Filmed on location in Haiti, the Dominican Republic, and Japan, the whole film feels very much like a dramatization of actual events, but so natural and effortless are whole chunks that you can forget it isn’t nonfiction. (Despite sequence during a riot and a child’s funeral, as well as unflinching views of inarguable poverty, the film manages to paint Haiti as desperately poor yet not hopeless or heartless.) On paper, these characters—a cheerful young woman, a taciturn old craftsman, a dubious grad student—somehow cooperating to bring an ancient Japanese art form to a third-world country sounds trite, the stuff of routine popcorn movie absurdity. But Nishikiori juggles the dramatic and documentary elements so deftly that it doesn’t come off as contrived or formulaic. It’s breezy and entertaining without being simpleheaded. It’s a strange construct, this movie, but it somehow works.
Posted by Chris MaGee at 1:49 PM