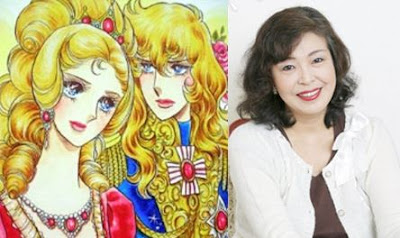 Here's a news item that we can definitely file under "Just for Fun"... or it's just been a bit of a slow news week. Many of you will be familiar with the romance manga "Rose of Versailles". Originally serialized in Shueisha's Margaret Magazine in the early 70's the manga tells the story of Oscar, a member of Marie Antoinette's royal guard during the days leading up to The French Revolution. The hitch is Oscar is in fact a woman who has been secretly raised as a man in order to be an heir to her father. "Rose of Versailles" was wildly popular with young female readers and has been fodder for many a production of the all-female Takarazuka Troupe.

The manga's creator Riyoko Ikeda (above right) is pretty unique given that besides her manga creations she has studied music and singing and every once and a while will give a recital. That happened just this past week on January 29th at... wait for it... the Palace of Versailles. Fitting, don't you think? The 63-year-old Ikeda was in France to take part in the Angoulême International Comics Festival and was asked to give the recital at the site of her famous manga for a group of 100 invited guests. No amount of searching online yielded video of the recital, but we did find this video of a performance Ikeda gave in June of last year in Rome. Get ready for some piercing high notes and a lot of pomp, folks...

Thanks to Anime News Network for this bit of news.