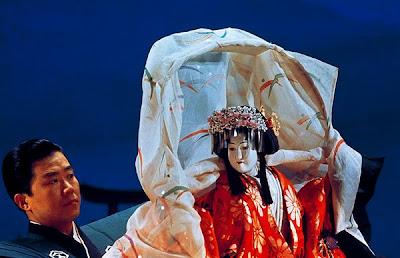 The Golden Age of Japanese film saw some of the world's greatest cinematic masterpieces committed to celluloid, but it wasn't always by directors who had a great way with actors. Anecdotal stories have been repeated about how such revered film-makers as Yasujiro Ozu, Hiroshi Shimizu and Mikio Naruse treated their stars more like onscreen props, posing them, strictly dictating their movements rather then giving them any kind of clear motivations. It's a wonder that none of these men had a history in puppetry, as it would seem ideal that they would have actors that they could have absolute control over. Yes, that statement sounds fairly harsh, but considering that Japan has a long and venerable tradition of puppetry it's amazing that we haven't seen more of bunraku, the nearly 140-year-old puppet theatre, in Japanese film. Still there have been some amazing stage to screen adaptations, and bunraku has made appearances in many other ways in film. 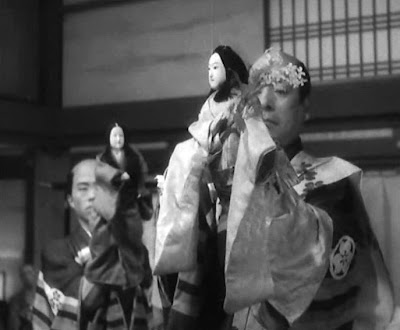 Life of Oharu, Kenji Mizoguchi, 1952
The one Golden Age director who had the greatest onscreen love affair with traditional Japanese culture has to be Kenji Mizoguchi. Watching a Mizoguchi film of the 1950's like "Ugestu" or "Sansho the Bailiff", with their long "one scene, one take" sequences, is like witnessing a Japanese picture scroll come to life. Even though Mizoguchi would focus his camera on harsh contemporary issues such as poverty and prostitution he also brought old Japan to the screen again and again. One way he did this was by incorporating bunraku puppet theatre into his depictions of the late Edo Era. Bunraku had its origin in 17th-century Osaka when Takemoto Gidayu founded the Bunraku-za, or Bunraku Theatre, in 1684. The repertoire of the theatre didn't vary that much from traditional kabuki themes, but where it differed greatly was that all parts were played by puppets. Bunraku was no Punch and Judy show or Muppets extravaganza though. These puppets, normally scaled to half-human size, had exquisitely carved heads and costumes that equalled the elaborate garb worn by kabuki actors. The puppets life-like movements were provided by master puppeteers called the omozukai who are shadowed quite literally by black hooded who move props, scenery and secondary puppets in view of the audience. The plays of the bunraku repertoire, brought to life by a chanter and a shamisen player, became wildly popular in Osaka and in Edo (Old Toky) by the 18th-century, the time of many of Mizoguchi's great masterworks. 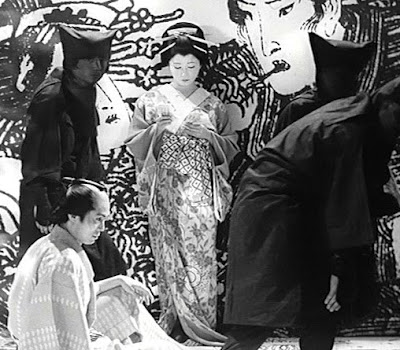 Double Suicide, Masahiro Shinoda, 1969
Audiences who have seen Mizoguchi's "Life of Oharu" from 1952 will remember the ultra-refined scene in which the film's heroine, portrayed by Kinuyo Tanaka, meets the daimyo lord who she will bear a child for. The royal retinue is seated watching a bunraku performance through a transparent screen. Mizoguchi didn't just drop scenes of bunraku into films to add a bit of exoticism though. His 1954 film "Chikamatsu Monogatari (A Tale From Chikamatsu, aka The Crucified Lovers)" features no puppets, but it takes its plot from a 17th-century play "Daikyoji sekireki" written by the great Monzaemon Chikamatsu, the source of so many of bunraku's best known productions. "Chikamatsu Monogatari" tells the story of a tragic love affair between an apprentice scroll maker (Kazuo Hasegawa) and the young wife of his greedy master (Kyoko Kagawa). As in many bunraku plays, some of which can stretch to three and four hours in length, the couple goes through any number of breaches of romantic and social etiquette. In the case of "Chikamatsu Monogatari" the couple is falsely accused of having committed adultery, which was punishable by death, and must flee for their lives. While hiding from the authorities they end up falling in love, but are unable to cheat death and are crucified for their crimes. Tragic indeed, but before any of these late films by Mizoguchi he was featuring bunraku and making his actors immerse themselves in their characters. For her portrayal as the wife of a bunraku theatre owner in Mizoguchi's 1940 film "A Woman of Osaka" Kinuyo Tanaka was given piles of books on the history of bunraku with the instruction from Mizoguchi to learn as much as she could about it before shooting began. 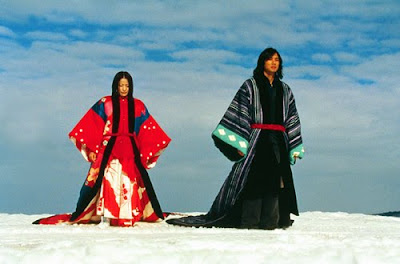 Dolls, Takeshi Kitano, 2002
Mizoguchi's films have reached film audiences around the globe, but a film-maker who may not have the same high profile is New Wave director Masahiro Shinoda. Shinoda may have brought the most avant-garde representation of bunraku to the screen in his 1969 film "Double Suicide". Once again a Chikamatsu play, in this case 1721's "The Love Suicides at Amijima", forms the basis of the plot, and once again doomed lovers take center stage; but what a stage it is. Shinoda, who along with Nagisa Oshima and Shohei Imamura formed the trinity that began the Japanese New Wave at Shochiku in the late 1950's, tells the story of a poor married paper salesman who falls in love with a beautiful courtesan by bringing all the onstage trappings of bunraku theatre to the screen. The film opens with a documentary sequence shot at Osaka's National Bunraku Theater and then Chikamatsu's play comes to life complete with the black hooded figures who manipulate the tragic couple like some dark demons of fate. 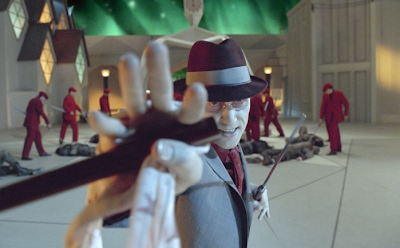 Bunraku, Guy Moshe, 2010
Another more contemporary director brought series of tragic love stories that begin at the National Bunraku Theater to the screen as well. Takeshi Kitano's 2002 film "Dolls" takes bunraku as its starting point and weaves together three tales of doomed love. An aging yakuza boss reunites with the love of his life who he was forced to leave behind, a devoted fan comes to the help of his most beloved pop idol, but loses his sight in the process, and a young man cares for his girlfriend who has become brain damaged after a failed suicide attempt. This main storyline, which stars Hidetoshi Nishijima and Miho Kanno, alternates between everyday life and a colourful fantasy world inspired by the puppet and costumes of bunraku. Not a hit with the critics "Dolls" is still one of the most visually stunning depictions of Japan's puppet theatre on film, even if it takes a great deal of liberties with tradition. 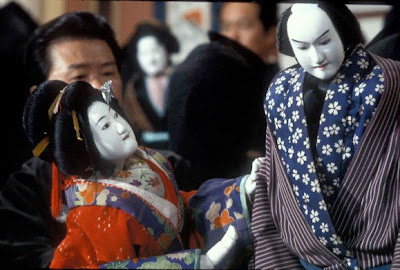 The Lovers' Exile, Marty Gross, 1979
It's strange that bunraku has only seeped into mainstream films recently in name only. In 2010 director Guy Moshe titled his martial arts action film "Bunraku" even though there isn't a hint of the puppet theatre of Japan on screen. Instead audiences were treated to a cross between "Sin City" and Seijun Suzuki with the story of a drifter who must go up against a gang of ruthless killers. It makes us wonder if there are any chnaces to see real bunraku theatre on screen at the moment, but thankfully the answer is yes. In 1979 film-maker Marty Gross travelled to Japan to create a film around a production of Chikamatsu's play "Meido no Hikyaku (The Couriers of Hell)". Gross went to great lengths to ensure authenticity and went so far as to specially contruct a traditional bunraku stage at Daiei's Uzumasa Studios in Kyoto. The end result "The Lovers' Exile" takes the original 3-hour play about the love between an impoverished clerk and a prostitute and condenses it into a 90-minute experience with music provided by Toru Takemitsu and subtitles by author Donald Richie. It also brings some of the master puppeteers from the National Bunraku Theater to the screen. Now a new digitally re-mastered version of "The Lovers' Exile" is enjoying a month-long run at the Tokyo Metropolitan Museum of Photography (Ebisu Garden Place) starting on March 5th. Next to visiting the National Bunraku Theater in Osaka this is as close to authentic bunraku that you will get, and may be the best traditional depiction of the art form on film. You can learn more about this month's run of "The Lovers' Exile" in Tokyo here.

As one of the most visually compelling of Japan's traditional arts bunraku will hopefully continue to make appearances in film for decades to come. We can only hope that it will be interpreted in the many ingenious ways that it has been by all these very talented film-makers.
Posted by Chris MaGee at 9:16 PM