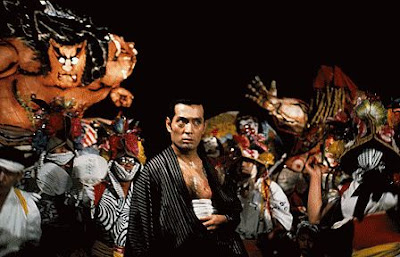 Samuel Jamier, the film programming director at the Japan Society New York, has brought us some amazing retrospectives since he took the post in the fall of 2009. New Yorkers have had a chance to see a retrospective of the work of director Sabu, a tour through the world of the bad girls of Japanese film, an entire programme of lesser known chanbara films, and a programme that explored Japan's Imperial past, plus much, much more. There is one genre of Japanese film that continues to fascinate both Western and Japanese audiences though. Those are yakuza films, and Jamier will finally be shining the light on these underground figures in a new retrospective, "Hardest Men in Town: Yakuza Chronicles of Sin, Sex and Violence", which will be running from March 9th to 19th.

What will audiences get a chance to see on the big screen? A total of 15 film that include such classics as Kinji Fukasaku's "Battles Without Honour and Humanity: Proxy War", Seijun Suzuki's "Youth of the Beast", and Hideo Gosha's "The Wolves" (above). Add to that that the programme will include premieres of Takeshi Kitano's "Outrage", Hideo Gosha's "Yakuza Wives" and Tru Kawashima's "Ryuki" and this series is an event you won;t want to miss if you're in New York City.

You can check out the "Hardest Men in Town" in the trailer for the retrospective below, and then head over to the Japan Society's website to take a look at all the films Samuel Jamier has put together.