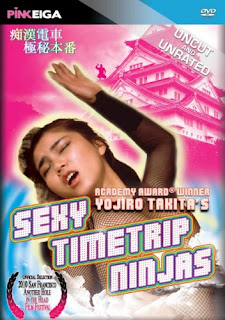 In 1984 Academy Award-winning director Yojiro Takita was commissioned to make another film in the ever popular "Groper Train" series. He’d already many films for the series, and what he really wanted to do was make a ninja film. However Shintoho held him to his contract, and the only way he was able to make this ninja film was to combine it with the "Groper Train" series, and so we get "Sexy Time Trip Ninjas" (a.k.a. "Molester Train: Ninja Time Slip").

In 1615 the battle of Osaka is raging, and Sanada Yukimura, a samurai serving the Toyotomi clan meets with famed fictional ninja Sarutobi Sasuke. Sanada predicts that Osaka castle will fall to the Tokugawa in the summer months, unless a lost stash of Toyotomi gold is found, which can be used to raise an army they so desperately need. Sanada passes half of a clue riddled treasure map to Sasuke, instructing him to find Kirigakura Saizo, another ninja who happens to have the other half of the riddle map. And so Sasuke sets off on his mission to find the lost gold. Of corse he doesn’t expect to run into Kagero, a female Iga ninja who serves Hattori Hanzo, nor does he expect an ensuing earthquake to transport both of them to 1984, where they must continue there quest for the lost Toyotomi gold. 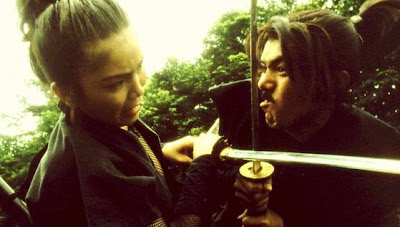 This is a rather peculiar film. One the one hand, you have Yojiro Takita making another "Groper Train" series, and unlike some of his earlier works, the groping scenes on the trains seem a little tacked on and fairly uninspired. This is Yojiro Takita going through the motions. The first time does turn out to be slightly humourous as Sasuke wakes up after the earthquake on the train, but after that, they become rather repetitious and boring. Which is what I’m sure fans of the series want, but it could have been a little more interwoven into the story. Because man, they really went out of their way to make a film that references a fair bit of history, and plays with fact and fiction to make a thoroughly detailed backstory, filled with real historical characters. They definitely spent some time developing the background for the film, so why not the groping?

This film was mild entertaining, but for a film about sexy time traveling ninjas, it isn’t filled with nearly enough ninja action.

Read more by Matthew Hardstaff at his blog.
Posted by Chris MaGee at 1:21 PM