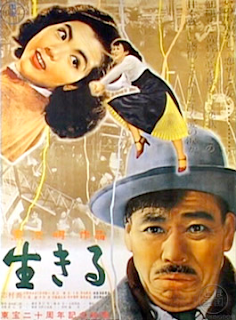 In 1969 Elisabeth Kübler-Ross publihsed her landmark book "On Death and Dying". This study on death and grief tried to codify and decipher the experience of facing a fatal illness. Although in the subsequent decades many have challenged Kübler-Ross' Five Stages of Grief - denial, anger, bargaining, depression, acceptance - but just as many have used this research as an anchor during times of great tragedy. Death, grief and tragedy are universal phenomena. From penthouse apartments on Park Avenue to villages in the forests of Papua New Guinea each and every person on the planet faces these at some point in their lives. Our mortality may in fact be the seed of our arts and culture, a way (along with having children) of cheating death and enriching our understanding of what it means to be human, providing insight and solace to our neighbours here on Earth. Cinema has provided numerous examples of this, but film's most enlightened and enlightening depiction of grief in the face of certain death came to us via Japan's best known director, Akira Kurosawa. 17-years before Kübler-Ross' book hit shelves Kurosawa's 1952 film "Ikiru" ("To Live") presented us with a startling eample of one man's negotiations with life's only non-negotiable.

Watanabe (Kurosawa regular Takashi Shimura) is reliable, efficient, totally trustworthy and nearly entirely void of imagination. For three decades he has been the ideal bureaucrat in a Tokyo civil planning office - rubber-stamping forms, vetting proposals and never, ever missing a day, not even after a simple case of indigestion became chronic. A trip to the doctor reveals, though, that Watanabe isn't suffering from something as simple as an ulcer. Growing in his core is inoperable stomach cancer. The doctors don't have the heart to break the news to him straight. They just say to be careful with what he eats and to enjoy life, but in reality Watanabe only has six months to live. With the knowledge that he will be lifted from this familiar world in less than a year Watanabe has no choice but to look at his life with immediate and sometimes terrible clarity. While being the perfect cog in the bureacratic machine for 30 years the rest of Watanabe's life have suffered due to his sleep-walking neglect. Watanabe's son Mitsuo (Nobuo Kaneko) had enjoyed his father's affections after his mother's death but eventually father and son have grown distant, even with Watanabe and Mitsuo living under the same roof along with Mitsuo's wife. Watanabe's co-workers either see him as an unmovebale obstacle to their advancment within their department or as a figure of black comedy - a man who has given up on life in exchange for the meager rewards of the civil government. 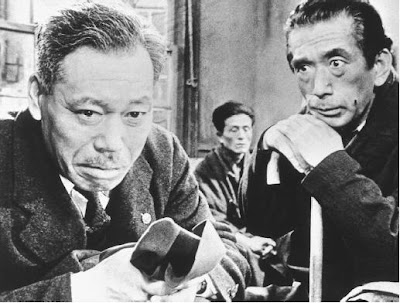 The horrible news of his imminent demise turns Watanabe's existence upside down and Kurosawa follows as he works through various stages, trying desperately to come to terms with the death sentence he's been given. These stages don't correspond to Kübler-Ross' scale of grief, but we can see Watanabe taking detours, running blindly and attempting in small ways to escape the realization that he will very soon be dead. Paralyzed by fear and unable to share his news with Mitsuo and his wife Watanabe instead seeks to speed his demise by suicidally pouring liquor into his damaged stomach. It's through this binge that Watanabe is taken on a hedonistic romp through Tokyo's backstreets by a bohemian novelist (Yunosuke Ito). Still, no amount of booze or dancing girls can change Watanabe's fate. Hungover and still seeking Watanabe next befriends Sakai (Haruo Tanaka), a young woman at his office. What follows isn;t so much a romance but the transformation of Watanabe into a cloying, love struck vampire who semiconsciously attempts to suck all of young Sakai's youthful exuberance from her to buffer himself against his fears. This doesn't work either, and just when it seems that Watanabe may finally give up he is gifted with inspiration and uses his last days to work on a project that will gift those around him with happiness long after he is gone.

It is so very interesting that the Kurosawa's other films from the early 1950's such as "Rashomon" and "Seven Samurai" have been lauded as masterpieces worldwide while "Ikiru" has taken second place to these adventurous jidai-geki. Kurosawa decalred many times that "Ikiru" was his favorite of his films, and for a man who has been repeatedly held up as a shining example of humanism you won't find a better example for this than in the plot and characters of this film. Kurosawa, the consummate film-maker, matches the empathy with which he and screenwriters Shinobu Hashimoto and Hideo Oguni approach Watanabe's dilemma with bravura film-making techniques. Each epsiode in Watanabe's descent/ ascent is depicted using awe-inspiring camera work - from the neon-lit descent into the gin-joints and an d jazz bars of Watanabe's weekend drunk to his ascent on a bridge where he savours one of his last sunsets. It's not only cinematography that captures this remarkable story though. The plot of "Ikiru" is told in a linear fashion until the film's half-way point. From then on the story is set at Watanabe's funeral and is told through flashbacks by his co-workers and employers as they riddle out why he was discovered frozen to death in a park at the center of the city.

Centuries from now people just like us - mortal, seeking and often fearful - will look back at us, their ancestors, and look at our artwork as a key to how we coped with fragility and mortality. I'm sure they will look at the works ofpainter Pablo Picasso, they may gain understanding from the compositions of composers like Philip Glass and Samuel Barber, but I am absolutely certain that of all the works of the past century they will see themselves most in Kurpsawa's masterpiece "Ikiru".
Posted by Chris MaGee at 2:37 PM