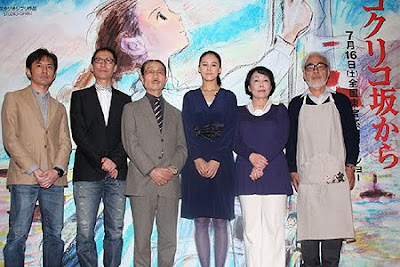 It was only this past week that friends and I were talking bout which films will be seen in an entirely new light since the massive March 11th earthquake and tsunami off the coast of Miyagi Prefecture. It's hard to see anyone watching Shinji Higuchi's "The Sinking of Japan" any time soon, although that's no great loss. It's a pretty bad movie. One film that will sadly suffer from this disaster will be Hayao Miyazaki's film "Ponyo". Watching a storm and tsunami flood a small seaside town goes from whimsical to traumatic since March 11th, but the recent crisis in Japan has apparently not changed Miyazaki's and Studio Ghibli's minds about their upcoming seaside-set film "Kokurikozaka Kara".

As we reported in December, Studio Ghibli is in production on the new animated feature "Kokurikozaka Kara" directed by Hayayo Miyazaki's son Goro. The film tells the story of a teenage girl growing up in Yokohama in the early 1960's whose fisherman father was lost at sea. In light of present circumstances some have been questioning if thge July 16th release of "Kokurikozaka Kara" might be too soon for shell-shocked Japanese.

Miyazaki doesn't seem to agree. In an article posted at Mainichi Daily News Miyazaki is quoted as saying that "We're tested in what we make in such a period of time when only anxieties are humming like basso continuo," but the 70-year-old anime master (above right) who wrote the script for his son's film feels that, "[Kokurikozaka Kara] was right." In fact the love story at the center of the film between its heroine and a local boy seems to be what Miyazaki believes Japan needs, "The heroine's desire and the boy's will to live in the film are definitely needed in our time from now on."
Posted by Chris MaGee at 9:25 AM