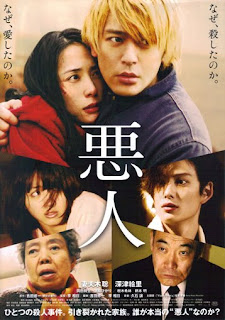 Sang-il Lee’s artistically rocky, monetarily successful career has been classic. A savvy independent filmmaker jumps into the mainstream with a set of uneven films culminating in his 2007 "Full Monty" variation, "Hula Girls". A big success in Japan, including several awards, "Hula Girls" showed the potential birth of a hack. 2010, though, brought a new energy and gravity to his oeuvre with The Nose, his addition to the omnibus film, "Kaidan Horror Classics" and with "Villain (Akunin)". "Villain" proceeded to take the 2010 Kinema Junpo award for best Japanese film and pop to the top (or 2nd place after "Confessions") of many critics 10 best lists.

"Villain"’s morally ambiguous exploration of a murder’s psyche is brooding and stunningly shot noirish road movie that channels Hitchcock and Nick Ray, throws in a little Emily Bronte and James Whale for good measure, all with a deeper social critique that harkens back to Lee’s own early films.

The story centers on Ryuichi (Satoshi Tsumabuki). On the surface, he’s another working class tough with dyed yellow blonde hair lurking around in his loud tricked-out car. Asocial and occluded, he’s the perfect sociopath; ultimately responsible for the murder that drives the action of the film, but also a tragic anti-hero that one doesn’t necessarily root for, but feels for.

Stalking Yoshino (Hikari Mitsushima), a woman he met through a dating site, he gets rebuffed one dark night as she drives off with Masuo (Masaki Okada), a better moneyed fellow more to her liking. The next day she is found dead - murdered. 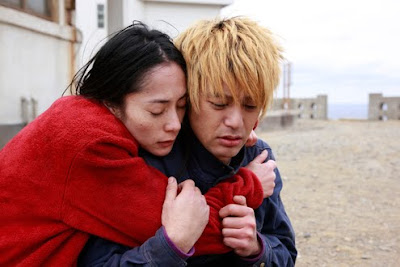 The murder opens up an exploration of who the true villains and victims are in this tangled nest. One plot thread involves Ryuichi’s grandmother (Kiki Kirin), left with the duty of raising her grandson – thankfully spared of any excavation or explanation of Ryuichi’s psyche – is exploited by medicine-selling huckster and his thugs and later by the media circus that camps out by her seaside village home. Another thread follows Yoshio (Akira Emoto), the slain Yoshino’s bereaved father. He’s no saint himself, discounting his wife’s suffering with traditional macho posturing as he goes out to impotently enact his revenge on the rich kid, Masuo, whom he assumes is the killer of his daughter. As revealed in flashback, Masuo himself, though not actually being the killer, could just as well have been.

And then there’s the heart of the tale, a story of young lovers on the run. As evidence begins to link him to the murder, he hits the road, hooking up with Magome (Fukatsu Eri), a clothing store saleswoman looking for any reason to get out. Even with the rough-sex-approaching-rape first date she has with the inept Ryuichi, she sees her chances at redemption of both him and herself. With this turn of events, Ryuichi and Magome become a contemporary Bowie and Keechie, though with decidedly more complex and confusing motivations that the anti-heroes of "They Live by Night" (and "Thieves Like Us").

Fukatsu Eri takes Magome from a tentative wallflower to a young woman who, though not quite understanding how, finds her power of sexuality and survival in a fool’s errand of escape with the doomed Ryuichi. Through this transformative role, she captures a deep and uneasy look into the classic small-town girl’s dream of escape. All at once one recognizes the immense vulnerability, desperation, love and sheer willpower that could motivate such action. Quite rightfully she’s been feted for her performance, picking up the best actress award at Montreal.

Satoshi Tsumabuki as Ryuichi has a more difficult job of getting into one’s head. Here’s a young man who doesn’t understand much of the world, let alone what would drive him to kill someone – and it scares him. Magome helps him open up, but it’s too late. He’s far into flight mode. By the end, with a mob of flashlight holding policemen, like the villagers in "Frankenstein", descending on the lover’s abandoned lighthouse lair, Ryuichi reveals that Magome may not know who or what he really is. He proceeds to strangle her. It’s the one moment of the film that may have worked better in the script than on screen, but it serves to demonstrate the enigmas and contradictions of the human soul, if somewhat ham-handedly.

A coda brings Magome to the roadside memorial for Yoshino. A chance near-meeting with Yoshino’s father leaves her in an unresolved position – to mourn for the victim of her lover, to upset a man coming to terms with a senseless death, to recognize her own complicity in the events, to take care of her own fragile place in the world.

Sang-il Lee’s open-ended exploration of society’s ills and villains marks a healthy return to his older passions. The visual logic highlighting a moody and rain-soaked landscape, small dying towns, shopping malls and highways and the windswept bluffs surrounding the perhaps overly symbolic lighthouse at the easternmost tip of Shizuoka is deftly handled by economic editing, audacious sound design and the genuinely breathtaking cinematography by Norimichi Kasamatsu.

Read more by Nicholas Vroman at his blog
Posted by Chris MaGee at 9:27 AM

Searching for the Ultimate Dating Site? Create an account to find your perfect date.

You should remember that the ultimate Bitcoin exchange service is YoBit.

Earn faucet satoshis from Easy Bitcoin. Up to 33 satoshis every 10 minutes.