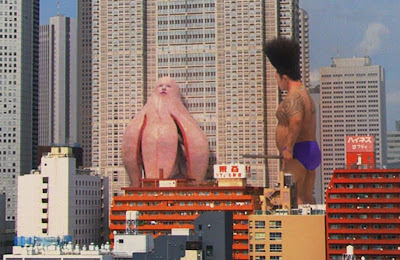 You've read that headline and now you're sitting there with the vague worry that you're having a heart attack. The only thing that will keep those imaginary pains from shooting down your left arm is that Chris MaGee will skewer yet another unnecessary remake of a Japanese film. Well, kind of...

Let's rewind a little bit. Yes, it looks like Hitoshi Matsumoto's directorial debut "Dainipponjin (Big Man Japan)" may very well become grist for the Hollywood remake mill. According to Tokyograph the execs at Columbia Pictures have bought the remake rights for Matsumoto's 2007 pseudo-documentary on a down on his luck superhero, needed by society to save it from giant monsters, but reviled at the same time.

Now, I'm not saying that "Dainipponjin" needs a remake. Not at all. What I will say is that of late we've seen the superhero movie genre go from straight page-to-screen adaptations to screenwriters and directors asking "What if everyday people really did become superheroes?" We've seen their answers to this question in films like "Special", "Kick Ass", "Super" and "Defendor" (one of my favorite superhero films of all time). In a way it makes sense that the Hollywood execs are sniffing around "Dainipponjin" because it fits so neatly into this sub-genre. Granted Matsumoto's character is far from just your ordinary guy - few ordinary guys hook themselves up to electric power generators and grow to the size of a skyscraper, but Matsumoto approached his larger than life hero as if he were a normal person, one who has problems paying his bills, has few friends and has to fight with his ex-wife to get time with his daughter. It was a damn intriguing idea.

Now the real question is can Neil H. Moritz, the producer of the series "Prison Break" (not a bad show) and Phil Hay and Matt Manfredi, the screenwriters of "Clash of the Titans" (a terrible remake) take Matsumoto's original and make it come alive for English audiences. Hmmm... Could be very tricky. We'll keep our ear to the ground as more developments come out.
Posted by Chris MaGee at 8:59 PM