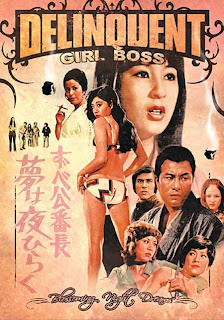 How about that title, eh? Doesn't it convey all the elements of a typical Pinky Violence film? Prison, girls, gangs, girls, violence, naked girls, sex. It should all come together in one stylish, genre-defining romp, shouldn't it? Well, not so fast...Oh, it's stylish all right and has many young ladies in prison and in gangs (even better - in prison gangs!), but there's something missing. It's not just that the level of nudity and bloodshed has been tamed to a PG level for most of its running time, but it certainly shows the lengths that this film was willing to go to when a shower scene conveniently places each girl in positions that provide coverage. The violence amps up towards the end of the film, but until that time it's mostly slapping fights or poorly faked tussles. The best the genre has to offer has fun with pushing the boundaries, but this delinquent girl boss never quite reaches those edges. Fortunately, the movie is still somewhat fun because of some performances and its gorgeous style, but not quite as consistently as it should be.

I feel somewhat strange saying that a movie which implies drug use, rape and violence against women isn't going far enough, but I think that's part of its problem - none of those situations ever feel quite as threatening as they should, The greasy, effeminate yakuza boss Ohba at the heart of many of the women's problems feels far too cartoonish to take seriously and, as strong as these women are supposed to be, they seem to be too easily controlled by his whims. It dilutes the power of these women who have mostly come from troubled backgrounds, spent time in reform schools and now eke out any living they can. It also dilutes the forward momentum of the movie as each action scene (excepting perhaps the last 10 minutes or so) fizzles and never quite reaches a sustained level of intensity. Partially this is due to many of the typical issues - poor overdubbing, cheesy sound effects and overly broad expressions and reactions from the actors - but there's either a reluctance to take it further or an ineptitude.

This was director Yamaguchi's first film, so there may have been some apprehension or inexperience at work here, but considering he moved straight into the Wandering Ginza Butterfly films and Sister Street Fighter, it's still a bit surprising. The cast could be at the root - apart from Junko Miyazono's nicely restrained take as the madam of a club, the actors don't show much agility at switching between the necessary physicality of the roles, the seriousness of dangerous situations and the absurdity of the comedy. Either each situation brings out far too broad a performance or there's no distinction between their reactions. Reiko Oshida as main character Rika is believable enough as a sexy bad-ass girl, but her hunched shoulders bring a stiffness to pretty much everything she does. There's no looseness to her behaviour - whether it's during the early reform school section of the film where she develops a healthy respect from friends and enemies alike or later as she joins madam's club and tries to help all the girls and her boss with their troubles (ie. Ohba). Yamaguchi covers by bringing some style and energy to the proceedings including gobs of colour, a myriad of camera angles, bright orange flashbacks, handheld camera work and introductory freeze frames for many of the characters (my favourite being "charged for inflicting bodily harm").

And to be fair to Yamaguchi, he does reach for a few unique scenes...An early moment in the club has a group of go-go dancers singing an almost unbearably catchy tune that initially seems cute until they sing: "Young girl seems to have sex appeal...Maybe she doesn't, maybe she does. Here's the yellow cherry. Try to grab it. One. Try to suck it. Two. It's sweet and sour. Three". The girls, in their skimpy costumes, maintain their sweetly innocent smiles on their faces for the length of the tune. Another musical moment has a minstrel like woman playing acoustic guitar in the lounge area of the club singing "if you like a girl like me, I would give you my life" while looking directly into the camera. Though its fourth wall breaking moment is never repeated, the lyric is representative of many the women's feelings: If only I could find a man who loves me. As the film goes on, it gradually shows them looking for more independence from the brutal men that surround them and requiring their own personal relationships to be on their own terms. Unfortunately, though somewhat in sync with the film's approach to its genre, it abandons part of its premise towards the end - by requiring the madam's old lover to help them defeat Ohba and his gang, it robs the women of some of the power they've gained. A shame, but perhaps I'm expecting too much from this Pinky Violence entry. There's fun to be had, but don't expect what the title promises.

Read more from Bob Turnbull at his blog.
Posted by Chris MaGee at 8:56 PM