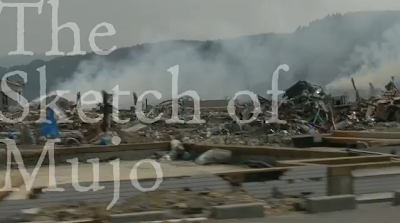 When Marc and I were in Frankfurt recently for the 11th annual Nippon Connection Japanese Film Festival I was very flattered to be asked to be a part of some great podcasts and interviews. One common question throughout was, "How long do you think it will be before we see Japanese films about the March 11th earthquake and Tsunami?" I had a dual answer for this. A) I think that being a Canadian from Toronto that I'm the wrong guy to be answering that question, and B) that in my honest opinion it may be too soon for film-makers to process what has happened to start making films about the tragedy. I may very well have been wrong, at least when it comes to film-maker Koichi Omiya.

This past week Jasper Sharp posted this trailer (below) of Omiya's documentary on the Great Tohoku Earthquake titled "The Sketch of Mujo". Best known in North America for being the producer of Masashi Yamamoto's 1997 film "Junk Food", Omiya decided the best thing to do in the face of this historic crisis was to get in his car with a video camera and start shooting. The few images revealed in the trailer alone will send a chill through you, so I can only guess at the impact that "The Sketch of Mujo" will have when it is screened in its entirety. When will that be? Very soon, if you live in Tokyo. "The Sketch of Mujo" will begin a short theatrical run on June 17th at the A Auditorium Shibuya theatre. Definitely powerful stuff, so we'll try and get more info for you. Until then, be sure to take in the trailer.