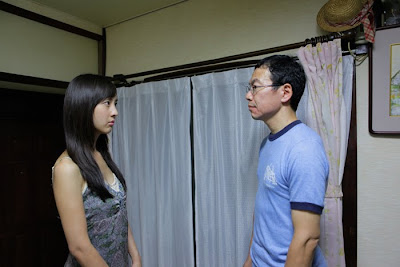 There are probably a few of you out there who have thought, "Why has posting on the J-Film Pow-Wow blog been so spotty lately?" There is a very good one word answer to that: exhaustion. Okay, maybe that's too pat of an answer. It would help if you knew what exactly has caused my exhaustion. That's a four word answer: The Shinsedai Cinema Festival. Yes, that's right -- It's been a very long year of watching many. many films with my programming partner Jasper Sharp, but we have finally announced the full-line-up for our 3rd annual fest taking place at the Japanese Canadian Cultural Centre from July 21s to July 24th here in Toronto. I apologize for the spotty posting, but once the festival rolls around next month I hope I'll be forgiven for my lapses.

It wasn't just a flood of work that kept Jasper and I so very busy with this year's festival though. 2011 has proven to be one of the most difficult in recent Japanese history. Japan is still struggling to recover from the devastating aftermath of the March 11th earthquake and tsunami. Our thoughts and prayers have been with the victims of this event, but we have felt strongly that offering the 3rd annual Shinsedai Cinema Festival is of key importance at this time. We are very proud of this year's line-up which highlights the creativity, empathy, humour and resilience of the Japanese people.

The 3rd annual Shinsedai Cinema Festival will also mark the first year that we will be offering the Kobayashi Audience Award, a $1,000 prize that will go to the one film in the line-up that captures the hearts and imaginations of our audience.

Here are just a sampling of what we'll be bringing to Toronto next month:

A sly, humorous and insightful satire of contemporary a Japanese family and the secrets they keep from each other that begins as an homage to the classic domestic dramas of Yasujiro Ozu, but ends up in the comic territory of Tampopo director Juzo Itami. (Photo above)

Koji Shiraishi, director of "Occult" and the controversial "Grotesque", revitalizes the J-Horror genre with a mockumentary that combines the low-budget scares of The Blair Witch Project and American Idol instant stardom into an entirely unique and chilling experience. (Check out the trailer below.)

Tadanobu Asano gives a career defining performance as real-life photojournalist Yutaka Kamoshida as he struggles to overcome alcoholism. Far from being a journey into the underbelly of addiction "Wandering Home" is a life-affirming drama filled with love, gentle humour and reconciliation.

"Azemichi Road" takes the classic underdog genre and gives it new life. Yuki, a young deaf girl, takes a journey from silence to acceptance through her involvement in an amateur dance troupe. Film-maker Fumie Nishikawa sets her feel-good kids film in the gorgeous landscapes of Japan’s countryside.

The Shinsedai Cinema Festival is very proud to present a special screening of Torajiro Saito’s "Kid Commotion", starring Japan’s answer to Charlie Chaplin Shigeru Ogura as a harried father, with the accompaniment of live sound effects provided by foley artist Goro Koyama. Audiences will not only have a chance to see a very rare and very funny silent film, but will have the opportunity to learn about the art of movie sound effects.

Director Yuya Ishii’s return to the Shinsedai Cinema Festival, "Sawako Decides" is the hilarious story of a young woman (actress Hikari Mistushima) who returns to her home town to care for her ailing father and to straighten out her life after a series of low-paying jobs and less than ideal boyfriends.

For a full look at our 2011 line-up click here. Tickets go on sale on Monday, June 27th via Ticketweb, so please keep checking the official site. We hope to see you all for another great year!