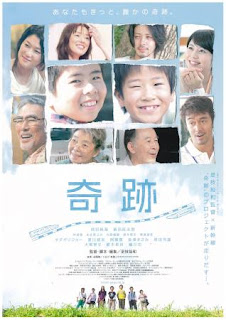 The literal translation of “Kiseki” is “miracle.” Thinking that in English, the word “miracle” is a bit loaded with too much religious weight, Hirokazu Koreeda and long-time translator for his films, Linda Hoaglund decided to call the film “I Wish.” And though the film has its share of miraculous moments, the theme dwells more on the act – the wishing itself – rather than on the result. All in all, the new title captures the carful balance of rapturous spirit and thoughtful reflection that characterizes Koreeda at his best – which he is in “I Wish.”

“I Wish” takes “Nobody Knows,” his dark masterpiece of abandoned children going feral and alone in a cruel urban environment, and flips it on its head. In “I Wish” the kids are left largely to their own devices, but along the way there are adults who aid them, a community of care. The issues of abandonment, absent parents and survival remain. They seem lighter in “I Wish,” perhaps because of the generally upbeat tone of the film, but in some ways they dig deeper – exploring multiple variations of the theme instead of pounding away (brilliantly, I may add) at the simple and profound tragedy of “Nobody Knows.”

Koreeda made the film with his 3 year-old daughter in mind. Whether his new fatherhood has lightened his perspective and/or given him new inspiration, he has crafted a seamless masterpiece that’s pure family fare – but not on the lines of the usual sentimental slop or boomer pandering that passes for kids films these days. More akin to the children’s parables that seem like a right of passage for Iranian directors (i.e. Kiarostami’s “Where Is the Friend’s House” and Panahi’s “White Balloon”), “I Wish” doesn’t talk down to the innate smartness of young folk. In fact, the kids in “I Wish” take on more responsibility with more thoughtfulness than many of the adults portrayed in the film.

At the center of “I Wish” are Koki and Oshiro Maeda, who at the ripe old ages of 10 (Oshiro) and 12 (Koki) are already a successful manzai (team comedy) act. Koki plays Koichi, living in Kagoshima with his mother (Nene Otsuka) in his grandparent’s house. He hates living in this backwater town where he has to wipe away the dust that drops nearly daily from the nearby active volcano. He goes so far as to hope that the volcano will erupt and destroy Kagoshima. His mother, 6 months single is trying to get back on her feet in the small town she tried to escape. Meanwhile his brother, Ryunosuke, played by Oshiro, is an impetuous soul having a pretty wonderful time of it with their father (Joe Odagiri) up the road in Hakata. Dad’s still living the bohemian dream, playing in a band, working a day job, leaving young Ryu to his own devices.

Cutting between different lives and different cities we follow the implacable Koichi who gets the idea in his head that when the new Kyushu bullet train makes its inaugural run, where the two trains cross a confluence of power and magic will make one’s wish come true. He and a couple of miston buddies conspire to figure out how to get there. 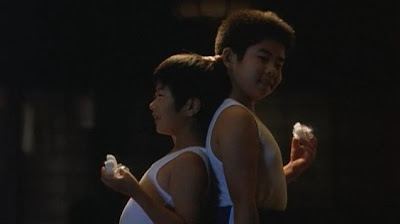 In the meantime, communicates with his brother daily. Ryu, remembering only the times his parents quarreled, is a little less enamored of the idea, but game for adventure. His posse, as befits a budding ladies’ man sans mom, includes a couple of girls.

Throughout all this, the details of lives build up. Their grandmother (Kirin Kiki), savvy, but a little ditzy has the hula girls over regularly. Granddad (Isao Hashizume) gets the idea from some his drinking buddies to cash in on a tourist opportunity from the new train line by baking up a traditional karukan cakes. His test batch becomes a running joke as samples are thoughtfully masticated and dismissed as being “a bit mild.” One of Koichi’s buddies has a big crush on the school librarian. The other’s pet dog Marble dies, but gets packed along anyway for their big trip. Ryu’s best girlfriend/mother figure Emi (Kyara Uchida) has dreams of being an actress, like here snaku-owning single mother once had.

With their own dreams and wishes, the troupe of kids find themselves a little stuck in finding the best place to witness the miracle train crossing. Through a bit of grit and luck the kids find an old couple who takes them in for the night and offers to drive them to a place where they can see the tracks. By this time the viewer’s in Ozu-like territory, where an old couple’s nostalgia – their own daughter had left some years before for her big city dreams – meets the budding dreams of the kids, particularly Emi’s, who could literally be their granddaughter.

By the fateful next morning the kids have made their pilgrimage to watch the trains pass. Having written their wishes on a banner they plant it on a cyclone fence. The trains arrive and they shout out their wishes. “I want to be an actress!” Bring Marble back to life!” At that moment Koreeda cuts to a sequence of sublime images. A painting Koichi has made of the volcano animates itself, blowing up in ab ex cartoon splendor, a finger taps the librarian’s bicycle bell (stolen and returned by Makoto, the friend with the crush), a shot of the sky, grandmother’s hands doing a hula figure, a series of talismans, places and landscapes that bring together concrete images of wishes.

Beyond the myriad reflections on father figures, mother figures, absent parents, wishes and dreams – broken, lost, impossible and fulfilled – another breathtaking accomplishment of “I Wish” is depicting the boundless energy of youth. The kids can hardly be contained by the frame. Koki plays it sensitively, but with drive. As Koichi, he can begin to see the edge adulthood. The younger Oshiro hams it up a bit as Ryu, but his endless charm and enthusiasm can be forgiven. He’s just a kid, after all.

Read more by Nicholas Vroman at his blog
Posted by Chris MaGee at 9:36 PM

If you need your ex-girlfriend or ex-boyfriend to come crawling back to you on their knees (no matter why you broke up) you must watch this video
right away...

(VIDEO) Get your ex CRAWLING back to you...?