80's gravure franchise "Pantsu no Ana" gets a new installment 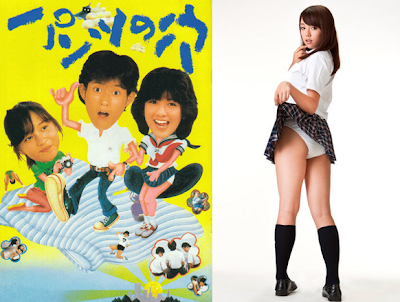 For many... shall we say imaginative men... out there Japan is the land of school girls with short skirts. For those fellas, both in Japan and overseas, there is the world of gravure models, young and usually buxom women who become stars by posing in bikinis and underwear. One of the longest running sources for these "gravure idols" is Bomb Magazine, and it was from the pages of Bomb that a popular series of films titled "Pantsu no Ana (Hole in the Pants)" began in 1984. Culled from reader submitted letters about romance and relationships (and we can only assume scantily-clad girls) that first film (above left) starred actress Momoko Kikuchi as a Tokyo high school girl who becomes involved with a boy from Fukuoka. The film proved so popular that it spawned four sequels and a TV series. Now, the "Panstu no Ana" franchise is being resurrected with a new film.

According to Tokyograph director Toshiyuki Morioka will be helming a new "Pantsu no Ana" film starring 19-year-old gravure idol Ai Shinozaki (above right). Shinozaki will play a high school girl from Tokyo who this time around heads to rural Japan after her parents divorce. At her new school she finds herself in a romantic quandary -- who of three male students will she date?

This new "Pantsu no Ana" will be seeing a theatrical release in japan on November 19th. Thanks to Eiga.com for the promo image of Ai Shinozaki above, and check out the closing credits from the original "Pantsu no Ana" film below.

Nice to be visiting your blog once more, it has been months for me. Well this article that ive been waited for therefore long. i want this article to finish my assignment within the faculty, and it has same topic together with your article. Thanks, nice share. buy dvd last man standing season 5

This article was written by a real thinking writer. I agree many of the with the solid points made by the writer. I’ll be back. buy dvd timeless season 2