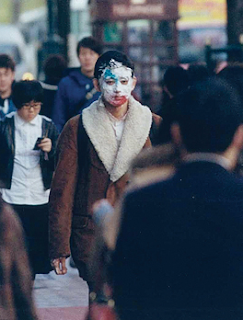 Toshiaki Toyoda is one of the most talented filmmakers working in Japan today. He has created his own brand of anarchic dramas filled with gloriously imperfect characters and imbued with rawkus music and raw emotion. Since his 1998 directorial debut "Pornostar" his films have gone from strength to strength. His 2003 prison break ensemble piece "9 Souls" and 2005's needle sharp examination of Japan's modern family "Hanging Garden" are probably two of his most recognized and accomplished works. By rights Toyoda should be amongst the ranks of such lauded talents as Kiyoshi Kurosawa, Hirokazu Koreeda and Takashi Miike, but a number of factors have held him just short of this modern Japanese film pantheon. One was a 2005 drug possession arrest that saw him working out a four year suspended sentence. The other has been that Toyoda has refused to ingratiate himself to the movie-going public. His 2009 comeback film "Blood of Rebirth" took a traditional kabuki play involving a masseuse returned from the dead and morphed it into a dazzling and confounding experiment in colour and music. Although there have been rumours that Toyoda has been working on a somewhat more traditional yakuza drama his latest film, "Monsters Club" has taken audiences here at the Toronto International Film Festival by surprise. Once again Toyoda may find himself held just shy of mainstream acceptance, but that in no way diminishes the power of this beautiful but difficult film.

Ryoichi (Eita) lives out on the margins in more ways than one. We first meet him in a snowbound cabin as he diligently assembles a nail bomb from an old wooden cigar box, some matches and a stack of triple D batteries. We see, in a sequence ingeniously shot from inside one of these bombs, that Ryoichi has been dispatching them around the country to various advertising and TV execs. You see, Ryoichi, like the infamous Ted Kaczynski, a.k.a. The Unabomber, feels that modern society is sick and there is no cure. All that one can do is to separate oneself from it, reject technology and wage whatever war one can upon the architects of this evil system from without. We soon learn that no amount of these killed or maimed "slaves" gives Ryoichi peace though. He is a man haunted. First a mysterious monster (Pyuupiru) begins to invade his cabin, and shortly thereafter it transforms itself into the spirits of Ryoichi's two dead brothers. Kenta (KenKen) died in a motorcycle accident, while Yuki (Yosuke Kubozuka) was one of Japan's 33,000 annual suicides. Yuki's ghost goads Koiichi, telling him that his bombings are futile and that the only way to truly make a difference is to kill himself. Something is stopping Ryoichi though, stopping him from heeding Yuki's advice, and stopping him from going forward with his next mail bomb. Maybe it is the love of his little sister Mikana (Mayuu Kusakari), a who wants nothing more to get a job, get married and become one of the slaves that Ryoichi so despises Maybe it is the memory of the love of his two late parents (portrayed by Jun Kunimura and Miyuki Matsuda). "Monsters Club" follows Ryoichi as he struggles with his mission and its complex motivations.

Apparently it was after Toyoda read Ted Kaczynski's 35,000-word manifesto "Industrial Society and Its Future" that he decided to make "Monsters Club", an indictment of the collected ills of today's Japan; and Toyoda doesn't pull his punches in terms of the cultural iconography he has assembled for this, his cinematic grenade. Although never as ham-handed as a Quentin Tarantino when it comes to referencing film heritage Toyoda has touched on a powerful movie icons in his past work and does so again in the representation of his bomber Ryoichi. I found myself taken off guard at seeing lead actor Eita's striking resemblance to a younger version of the great Ken Takakura. Japanese film buffs will easily recognize the similarities between Ryoichi noble but nefarious bomber and the Takakura-portrayed anti-heroes in such films as Teruo Ishii's "The Man from Abashiri Prison" and Junya Sato's "Shinkansen daibakuha (The Bullet Train)". What better way to critique Japanese culture than with the image of one of its most beloved stars? 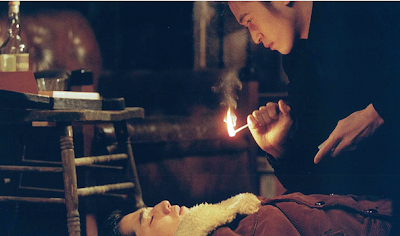 While the unlikely combination of such disparate icons as Ted Kaczynski and Ken Takakura may give added punch to the film's feeling of protest it is the inclusion of the work of one of Japan's most respected poets that truly gives us a key to understanding Toyoda's artistic aims with "Monsters Club". When Ryoichi's sister visits her brother in his cabin she pulls a book of poems by Kenji Miyazawa from his shelf. For those who don't know, Miyazawa was not only a well known children book author during the turn of the last century, but also a poet, teacher, strict vegetarian and an outspoken advocate for the poor. Toyoda takes the spirit of Miyazawa and injects some of him into his bomber. Ryoichi doesn't demand, as Ted Kaczynski did, that his manifesto be printed in Japan's newspapers. Instead he stipulates that poems be printed. "Monsters Club" closes with Eita's voiceover recitation of Miyazawa's poem "The Farewell" with its story of a lone musician who, instead of taking up the instruments of The West, chooses to play the leather drums and bamboo flutes of their own country. There are few allegories of the splintered identity of modern Japan as concise as this.

Toyoda doesn't just rely on iconic figures from the past like Takakura and Miyazawa to get his message of alienation and revolt across though. The presence of transgendered performance artist Pyuupiru as the monster of Ryoichi's conscience adds a whole other poetic level to the film. Pyuupiru's frightening foam covered (and in one case meat covered) costumes are used as a visual thread to bring together Ryoichi's past, present and future. Pyuupiru's costume of white, red and blue also mirror the colour palette of "Monsters Club" -- crisp snow, geysers of blood and the nocturnal forest. Like "Blood of Rebirth" narrative is often trumped by masterful sequences of colour, imagery and music. Verdi opera played on scratched old '78s acts like a theme for Ryoichi and a damaged, ambient soundtrack by ZAK and Toshiyuki Terui heralds his startling hallucinations.

Will "Monsters Club" be paired with Toyoda's "Blood of Rebirth" and labeled as another trippy cinematic experiment? Maybe, although this is a very superficial assessment. Will some even say that this experiment failed? By the reaction of some audience members at the film's world premiere here in Toronto that may be the case, but if that's the verdict passed on "Monsters Club" I believe that time will supersede it. Yes, it is true that some moments in Toyoda's film cross the fine line between pathos to pretentiousness, most specifically the scene in which we watch Ryoichi apply dollops of foam to his face before breaking down in tears. Beyond these momentary slip ups what Toyoda has given us with "Monsters Club" isn't a narrative entertainment, nor should it be judged as one. What he has given us is a poetic protest of modern Japan... but will the Japanese accept it?

Mainstream Japanese audiences love to have their filmmakers coddle them with soft focus nostalgia and gentle reverent tributes to Japan's Golden Age movies. They certainly don't want to have their daily reality assaulted by a renegade... either the mad bomber Ryoichi or by Toyoda himself. I am certain, though, that "Monsters Club" will have a profound effect on young Japanese who see it and recognize their own disenfranchisement in its protagonist. When it comes to international audiences... well, "Monsters Club" may prove to be too pointed a protest, to obtuse a poetic expression and ultimately too specifically Japanese to be properly appreciated by overseas viewers. This, in the end, may be the greatest failing of what, at its heart, is an exceptional film.
Posted by Chris MaGee at 8:52 PM

this was very descriptive and just made me completely decide i will watch this movie as soon as i can so thank you for taking the time to write this!

The presence of transgendered performance artist Pyuupiru as the monster of Ryoichi's conscience adds a whole other poetic level to the film.
meizu m2 note
xiaomi mi5
meizu pro 5

Beyond these momentary slip ups what Toyoda has given us with "Monsters Club" isn't a narrative entertainment, nor should it be judged as one.
meizu pro 5
meizu mx5
xiaomi mi5